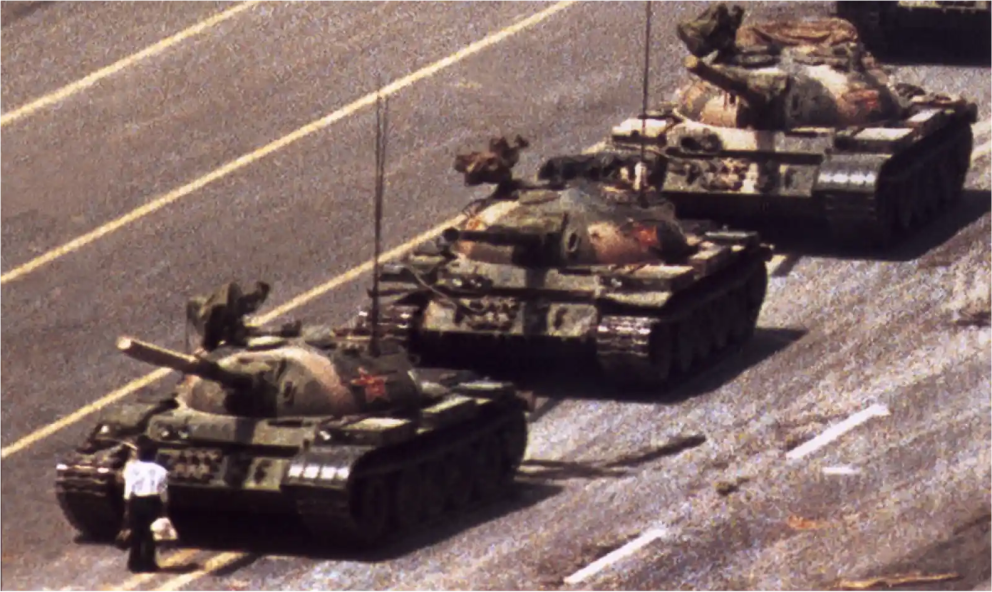 Nazi.  Is there a more bloody word in this world, only four letters, yet it has such power, like a history curse?  A bloody word that is often used by little understood.

Type in that word last week and you’d find a picture of Tess Asplund, not that you’d know her name.  She’s the Swedish woman who stood in the street and held her fist aloft in front of three hundred members of the Nordic Resistance Movement.  The words Fascist, Nazi and racist are bandied around far too freely these days, bogyman words that people use as both a warning and as weapons that damage or slander, used against men who come in the night to burn down hostels, or university professors who stand up for the freedom to demonstrate a difference of opinion.  What really happens is that when we overuse words they lose their power, the blood sacrifice in their meaning drained for nothing but point.

But in this case fascist Nazi’s was spot on, the NRM being national socialists (that’s sort of what a Nazi is).  Do you know what national socialism is though, its history, its connection to Marxism and capitalism, how it was supported as a bulwark against Communism by the West (Hitler’s rise used almost as a balance to Stalin’s), the importance of creating a shared myth used to bind people (such as the Aryan race), the role of propaganda to bend the will of a nation, not with fact or logic, but emotion?  If you read up on the ideas behind Nazism quite a lot of it makes great sense, which is why it was so popular, when being a Nazi was as cool as being a member of the Green party.  It promised a bright future, based on both myth and science, as valid as capitalism at the time, another way, and far less radical than Communism.  Some warned about where these ideas would lead, but few wanted to listen, the future too bright to look for clouds.  I doubt many people would seek out the history and ideas of national socialism, after all, why would you, see things only a fascist or Nazi would see.  Know they enemy I say.

Back to Tess Asplund, standing in the street against the Nazi thugs.  You don’t need bogy words when you have bogy men such as these, stupid skinheads, fat and sweaty, who can’t defend themselves on panels, just a joke, no threat at all, out in the street with their silly flags and armbands.  You see the same here in Dublin, men marching next to funeral hearses in British army surplus combat fatigues and Ray-bans, like piss poor B movie extras.  Funny but when I see these people, paramilitaries, Nazi’s, racists and fascists I just think ‘Boy you’ve got some balls’, like Star Trek fanboys on the tube in their costumes, not giving a toss what people think.  Was Tess Asplund brave to stand there, the police beside her, the photographers, well it ball too?  It reminded me of a story a friend once told me, about being in Afghanistan and getting caught in a car in a huge demonstration.  They were armed but knew they’d be torn to pieces if they started firing, and maybe torn to pieces if they didn’t.  Instead, they pushed forward inch by inch in the car, through the crowd, people banging on the body and windows.  My mate said, “ninety-nine percent of the people were just pissed and angry, probably many of them neither, just out for a rubble, so all we had to do was pray we didn’t come across that one percent”.  In the end, the Stockholm police asked Tess Asplund to step aside, which is what you do in a democracy.  My issue with Tess Asplund and the photo is that it makes a nice little neat media package, a quick stop before turning the page or scrolling on, the men before her clowns, us - the liberal majority - against them, the stupid racist right-wing minority.

Tess Asplund reminded me of Tank Man, the never identified Chinese man who stood in front of the tanks heading towards Tiananmen Square in 1989, one of the most iconic nobel acts every captured by a photographer.  This image went around the world, symbolising the small man against the state, freedom over the impression, even against the most impossible odds.

People often tell me I’m far too cynical and pessimistic about the world, that I don’t see the good in people, which makes me seem right-wing.  Well, I do see the good, but I don’t ignore the bad, the intentional bad and unintentional, where people do what makes them feel good and moral but only do harm.  I asked someone the other day if they’d ever met a racist or a nazi, as they seemed to view such people as you would child molesters.  Such people, be they marching through Stockholm, chanting on the terrace, or exposing themselves on Youtube comments, are just like you and me, in fact, you’ll find such ideas in your parents, your grandparents, sitting hid well in good people like you.  I said that such people should not be dehumanised, nor should they be appeased, but understood.

Here’s why my cynical take.  We’re on the eve of a potential Brexit, Trump is ascendant, and right-wing parties are growing strong all over Europe.  In your liberal mind - a mind that has been bread to deny the fact, to go for hope over logic - you’re thinking “it’ll never happen”.  And yes it may not, the UK stay in, Trump defeated by Clinton, the right falling apart.  But could you have foreseen this world ten years ago?  I did and people said I was just being racist.  Tell me this, if the sea came in one day, and the tide reached to the bottom of your door, would you sleep so well?  We live in dangerous times, and Tess and her Stockholm Nazi’s are just Facebook filler.  For every brave Nazi you see marching there are a hundred thousand mums and dads, brothers and sisters, black and white, who feel alien to such people, yet give their vote to their cause.  Right-wing governments and totalitarian regimes are not put into power by thugs, but they people sat at home watching TV, just ask any liberal Turk, he’ll tell you how easy it is.

So what did Tank Man do?  He stopped the tanks for a few minutes (it’s said the tank crew were executed for not running him down), then they carried on, the Chinese people’s army killing several thousand people that day as they pushed on towards the square.  It was both the continuation and the beginning of a new repression of the Chinese that continues to this day.  The victory of Tank Man could be measured in minutes, the stirring of our human hearts no match to a bullet in the head in a Chinese prison.  I don’t think you can fight such forces as these, it’s beyond us, the belief we can simplify our way of coping with the fact we are powerless, together or apart.  There is no V waiting in the tube.  No, the only defence we have is our compassion, something we’re good at, as well as knowing our shared history, plus coming to terms with both the light and the darkness of us.  We should applaud the spirit of Tess Asplund, but then move on and think not about her, but that stupid Nazi scum with his silly flag before her, he’s much more important than Tess.  We know her, she’s us, but him, no, he’s the one we need to know, the fear he has, his anger, what drives him to be as brave as her, perhaps braver.  Find it in your heart to have compassion for him and perhaps our children won’t need those bloody words anymore.