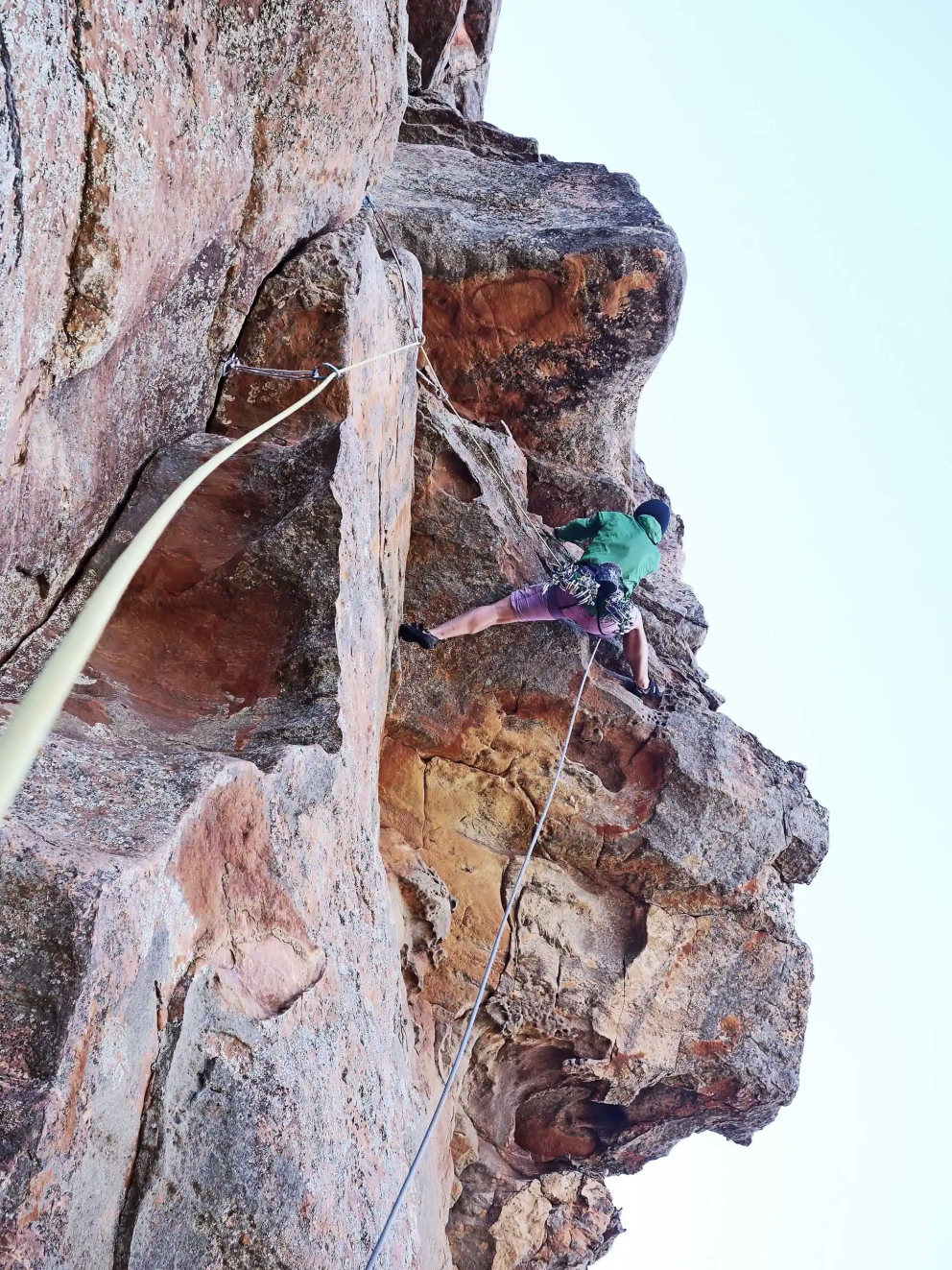 Ever since the once specialised Beal Joker 9.1 mm hit the market well over a decade ago, the diameter of the default single rope has crept down and down, making what was once cutting edge - ropes for people who don’t buy their own ropes - now pedestrian, the kind of thing you’d buy your kids from Decathlon.

Twenty years ago I’d say the standard for a single rope was between 10.2 mm and 10.5 mm, ropes like the Beal Edlinger and Mammut Flash bread and butter for climbing shops, as well as the hard man’s Edelweiss Stratos, with some climbers even still lugging around chunky 11 mm ropes like the Mammut Flex. For me, the hardcore single was the Mammut Galaxy (10 mm), which I’d used on alpine climbs and big walls, and was the default sports rope, but suddenly it seemed as outdated and heavyweight as an 11 mm, because overnight, it seemed everyone’s ropes went on a starvation diet.

The introduction of these skinny single ropes also coincided with gym climbing really taking off, and although anyone schooled in trad retained a focus on safety, most new climbers were coming from climbing walls, where chopped ropes was not a thing. A skinny single rope, bright and new on the shop rack, seemed to offer several benefits that could easily bedazzle a wall climber - low weight, low cost, a rope that could be doubled up later as they progressed (all great sales lines), and a rope that could be used down the wall, on the crag, and for top-roping. Also, single ropes were easy to handle and less faff than doubles, as well as sportif and more hardcore in the mountains (you’d never see Dean Potter with two ropes would you?).  And so, within a few years, as people rapidly wore out thick ropes down the wall that would have lasted ten years on the crag, the standard single rope diameter went from 10.5 mm to about 9.1 mm, with the Joker and other ropes by Mammut, Edelrid, Stirling etc revolutionising what ropes we used.

One reality is such thin ropes are not that great for indoor climbing, as they’ve just not got enough beef to them, and wear out too fast, bog-standard wall climbing never their intended use, but rather hard sends and on-sights and maybe speedy alpine climbing. For many climbers, a 30 or 40-metre length of 10.5 mm rope cut from a roll (matched to the wall they climb), is a better investment, but nevertheless, these ropes soon escaped the walls and hit the crags. Now, almost everywhere you go, people are cragging on skinny singles.

I’ve always used double ropes for trad climbing, probably because I put too much gear in, and I hate having to untangle alpine quickdraws for every piece, and have found more and more, as I’ve climbed outside of the UK, people asking why have I got two ropes? I tend to ask them back ‘why have you only got one?’ (“Would you parachute without a reserve?”), but the reason for the question is most people you meet learned to climb indoors (very often they still have their gym tag clipped on their harness), and what seems normal - and safe to me - does not seem normal to them (it just looks like a load of faff).

The reality is for most people who are trad climbing the use of a skinny single rope is totally fine, as they rarely ever fall off anyway (“you can fall off, but don’t”), being light reduces drag, and any falls tend to be very short and safe.

So what’s my point here? Well although we’ve moved the standard for single ropes, and without an increase in fatalities (cut ropes etc), we’ve not really done the same with half ropes, with the standard remaining between 8 mm and 8.5 mm.

But I think this is changing.

Until a year ago I had always stuck to 8.5 mm half ropes, (Beal Cobra and then Petzl Tango) as they seemed to always offer a good balance between lifespan, edge protection, handling, and I only used thinner ropes for ice climbing and alpine climbing. Maybe it’s an age thing, but after some mammoth carries in the High Sierras and Mount Kenya, where you had two weeks food and all your trad gear, I decided - after losing my Tangos in a rescue - to switch to a pair of Petzl 7.7 mm Paso Guide ropes.

The first thing I noticed, of course, was the weight, weighing 2.4 kg vs 2.8 kg for the Tango, meaning a saving of 800 g for the pair, a significant amount these days. Another factor is the bulk, the 7.7 mm packing down much smaller in a bag, important when you’re packing in a ton of stuff. On one occasion I even managed to stuff the ropes into my jacket on a rappel to avoid the rope blowing around and getting stuck.  Other things you notice is the ropes have less drag and pull more easily on long abseils, and when they do get wet they weigh less and dry faster.

The downsides are they’re at the extreme range of what a belay device can hold, so worn devices don’t provide the amount of holding-power I feel is safe (mainly when rapping), so you need a device to match that’s in good condition (cleats not worn smooth).

What about the safety of using such thin ropes when climbing? Won’t they cut on edges or be more easily chopped than a beefier rope? Well, I’m of the opinion, having had ropes both chopped and cut over edges, that unless you’re bumping up the diameter by a significant amount, say from 7.7 mm to 10 mm, the kinds of edges that will damage or chop a rope (generally when the rope runs down an arete), will damage an 8.5 mm just the same, and a rock hitting a 7.7 mm will do the same damage if it hits an 11 mm. Major damage of a rope destroys the rope, but at least here you always have a back-up, the primary reason why double ropes are best for big committing climbs.

I’ve used the two 7.7 mm Paso ropes constantly for about a year, climbing on them on average about five days a week in all sorts of conditions, from down to minus 50 degrees on Denali in February for a month, ice and winter climbing in France, Italy and New Zealand, and three months of rock climbing in Australia, often on pretty abusive rock, and at the end of all that they’re still in good condition.

Yes, to begin with, a lot of climbers would comment on how thin the ropes are, especially if they were used to single ropes, but like any equipment, what once seemed extreme, like 19-gram karabiners, a polystyrene helmet, 8 mm slings, soon feels normal.

We always used the ropes in traditional double rope style, and only switched to a twin system (both strands clipped into every piece, so effectively having a 15.4 mm rope) when doing bolted routes (such as the fantastic 8 pitch ‘Bunny Bucket Buttress’ in the Blue Mountains), as this reduces the fall length (due to rope stretch) and wear on the rope (you go from 7 falls to 20 falls, not that anyone pays much attention to such things).

Another factor that always has to be considered is the overall functionality of a rope system, how can you rappel on it, can both strands be fixed and ascended and descended, what’s it like to haul on in a rescue? If you compare two of these ropes at 4.8 kg to a 9 mm single rope, like the Petzl Volta (9 mm), matched with a 6 mm Rad tag line, you save 240 grams, but is that saving of value if you find yourself in a haunted house of loose rope chopping blocks?

But isn’t a 7.7 mm rope a highly specialised rope, designed only for ‘mixed, snow and ice environments’? Yes, but so was the Beal Joker, and it’s how a rope is used that defines what a rope is.

I think such an approach like this would not suit a climber who’s pushing their limit constantly, someone like James McHaffie. For James, his rope system is like a parachute for a BASE jumper, as soon as he leaves the ground his life is going to depend on it, that falling off is like getting wet surfing (sorry to mix my metaphors), that the further to your limit you go, the more you need that rope system to work every time, hundreds, maybe thousands of falls caught a year. But for a climber who rarely falls off (who’s overly conservative), which is most trad climbers, the rope system is more of a backup, a safety net, more like a parachute in an ejection seat. You want it to perform in an emergency when your foot slips or your strength runs out, but you don’t expect to do much ejecting.