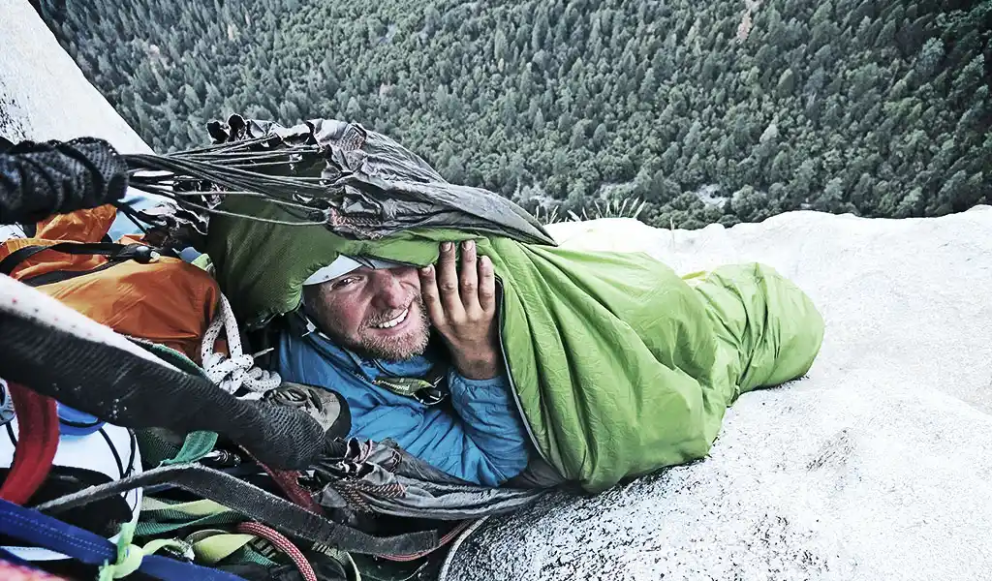 Although I try not to - recently I have been ranting (I do apologise) - to others, at the world and at myself.

When we reached the top of Moonlight Buttress a few weeks ago, someone asked Alex Jones what climbing a big wall was like.  “A big wall asks everything of you, takes all your energy, until you have nothing left to give… and then it asks for more, and you find it from somewhere… and then more still”.  As she said this, the other climbers: Paul Tat, Brian Hall, Aid Burgess and Rory Gregory all looked at each other and nodded.  Yes this tiny welsh woman had understood the lesson.

We raised £1.5 million pounds for charity (and growing), but more importantly for me we showed climbing as it should be shown (fun, exciting and hard), and maybe motivated some people to get out and do something.

The Zion trip was a little holiday from the disaster of my life, and soon we were back on the road to Las Vegas to send me back. At the airport the guys dumped my bags on the sidewalk while I looked for my new fancy Samsung phone (given to me by Samsung to use in Antartica).  It was nowhere to be found.  We searched high and low, my self loathing rising, my life a non stop horror of loosing and finding.  And then we saw what had happened, the van - this fucking stupid American van - had a slot where you put things (drinks, credit cards, wallets) that just allowed things to fall into the engine and out onto the freeway.  I laughed it off, and just checked in by myself (I had to fly home the day after we topped out to do my show in Manchester), but while I sat waiting to fly I began to rant to myself, that loosing my phone was some kind of slap me down by life - sort of “don’t assume just because you’ve done this good dead that you’re off the hook”.  It seemed so unfair.  And then, trying to buy a cup if tea in Starbucks (tea always soothes such thoughts) yet again my card got declined.

Back home I got my head down and just worked, worked, worked - fitting in seeing the kids between touring and driving and writing and sometimes - but not often - sleeping.  There was no time for living.  Life at the moment is like a long course of sleep deprivation, but not just sleep, calmness deprivation, happiness deprivation, just being in one bed deprivation!  But I don’t mind, this is what I want, and know working my ass off will get me some peace (and some funds for trips, sorry I mean normal life, as I’m trying to go cold turkey on trips until I can sort out my ‘real world’ problems).  The worst thing is the time to dwell, hours and hours driving, time to think.  I think a lot about Karen, what life will be like without her.  I think alot about the kids, and how my ex wife has to take the burden of me being away so much, but how I can see no way around it, and also her partner, who also has to take that burden of ‘my kids’.  Someone told me the other day that I should be easier on myself and that I ‘never wanted kids’ in the first place, but I think most men - if they’re honest - don’t want kids either.  As men, woman make us do things we don’t want to do all the time.  If left to our own devices we’d probably just play all the time, or sit around doing naff all.  It’s woman who get us inline, and focus us on the right path for long term happiness - or at least stability. Everything I’ve ever done in my life was down to the support of a woman - and that includes Ella and Ewen, the only truly great achievement of my life.

I had joked in my last blog that soon all I would have is just a shit van and a ton of gear (no house, savings, pension etc), and was inundated with amazing emails, tweets and messages, telling me to keep in going (you all know I’m too stubborn to change anyway).  But on the way home from my gig in Birmingham I hit a pot hole with a giant crash, but was so knackered (went to bed at 4am that morning, and had still to drive back to Sheffield), I just kept my fingers crossed and kept on driving.  It was only when I hit the pot holed streets of home did I realise something was wrong, seeing that the rear of my car was at a funny angle.  “Is it worth fixing” I asked my long suffering (and much wealthier for it) garage mechanic.  He looked at me and with a slow shake of his head resigned it to scrap.

With no car (and ranting that now I only had climbing gear, and not even anywhere to put it) I had to push on with the last dates of my tour, calculating I could do it by train.  Before that I had an interview for BBC Radio Lancashire (and Manchester ) in Blackburn with Alison Butterworth. When I’d been asked I really couldn’t be arsed going all that way, and most interviews can be just done ‘down the line’ from the studio at BBC studio in town.  But they wanted me to come in, as the interview would be longer, and I thought that it was only right to take advantage of their offer (could sell a few more tickets).  Getting there at ten o’clock would mean getting up super early, when I was already knackered, but I agreed.  And so the day before, about to put on the alarm to get up and get the train, I double checked the time, only to find it was 10pm not 10am!  I got a lie, but this meant I wouldn’t be able to get home afterwards unless I could hire a car, meaning more expense - but I’d said I’d do it.

Next day I hung around the house, trying to relax, but knowing I had to pick up car, and get there on time (I get a lot of anxiety about traveling - mainly due to being a fuckwit) I didn’t do a good job about it, as I always seem to find a way of fucking these things up.  So turning up with plenty of time at the Enterprise car hire place I handed over my passport and drivers licence, and waited for my key.  “Do you have 2 utility bills mr Kilpatrick?” asked the man behind the counter, the small office full of people tapping away behind him.  I thought he was joking, having hired hundreds of cars all over the world, and never once had that question been asked.  “No” I replied “Are you having me on?”.  The man explained it was company policy.  I didn’t have anything.  “But I’m famous” I said, half joking, clutching at straws.  All typing stopped, and all eyes were suddenly on me.  “I climbed that route in America with Alex Jones - I raised 1.5 million pounds for charity”.  “Oh - I think I recognise you” said a thin woman.  “What was Alex like” asked the man at the desk “…was she nice?”.  And so I talked about Alex and the climb for five minutes, then asked “so can I hire a car?”
“Not without two utility bills I’m afraid…. it’s company policy”.
FFFUUUCCCKKKK!
And so I went and got the train, knowing I’d have to spend even more money to get a bed for the night (I will be richer after talk monies come in, but this take a while).

I arrived in Blackburn, a town like Hull, full of pubs and bookies and pound shops, and where late at night the streets are haunted by the Zombies of drugs, alcohol and desperation.  With no phone I couldn’t just google map where I was going, but after an hour of wandering I made it there and was buzzed into the building.

The interview was actually from about 11am till 1am, and my heart sank at the thought of being up so late again, and that I still hadn’t sorted out a bed for the night. But like I’d said, I’d made a commitment, so here I was and may as well give it my all.

The end the interview was one of the best I’d ever done, and far more revealing than I expected, covering love, depression and rim shots, until finally, at 12.45am I was free to go - but just before I did, a caller name Pauline rang through: “I just want to see if Andy wants a bed for the night” said a woman who sounded like my mum.  “Are you married?” I asked, worried I may end up with my head in a carrier bag “Oh yes - me and my husband Paul will come and pick you up as well”.  And so I took their offer, and after a little awkwardness in their car - Paul being far from happy about his wife inviting a stranger in to their house - I spent the night with perfect strangers, and sat drinking tea until twelve the following day.

Like I said, recently I’ve been ranting, both about my own giving and lack of receiving, and also the thought life was actually punishing me in some way.  But then I thought about how much I hate charity wankers, who exploit a good deed for their own betterment, career and ego (when I ranted about Bear Gryll’s total lack of humility at excepting a honorary rank of Colonel in the Royal Marines - green beret included - people told me how much he raised for charity).  I think if you raise money for good causes you should keep it to yourself, otherwise your probably just doing cheap PR (lets call this Jimmy Saville syndrome).  Thinking it through what struck was not the unfairness of life, karma, the almighty, but the fact that we should not do good for a reward, or fame, or a high five from life.  We do it because it is right and descent. It shows us that we have compassion for our fellow man.  Like Paul and Pauline, we should be bold in our giving and ask nothing in return.  Our humanity should be our only reward.