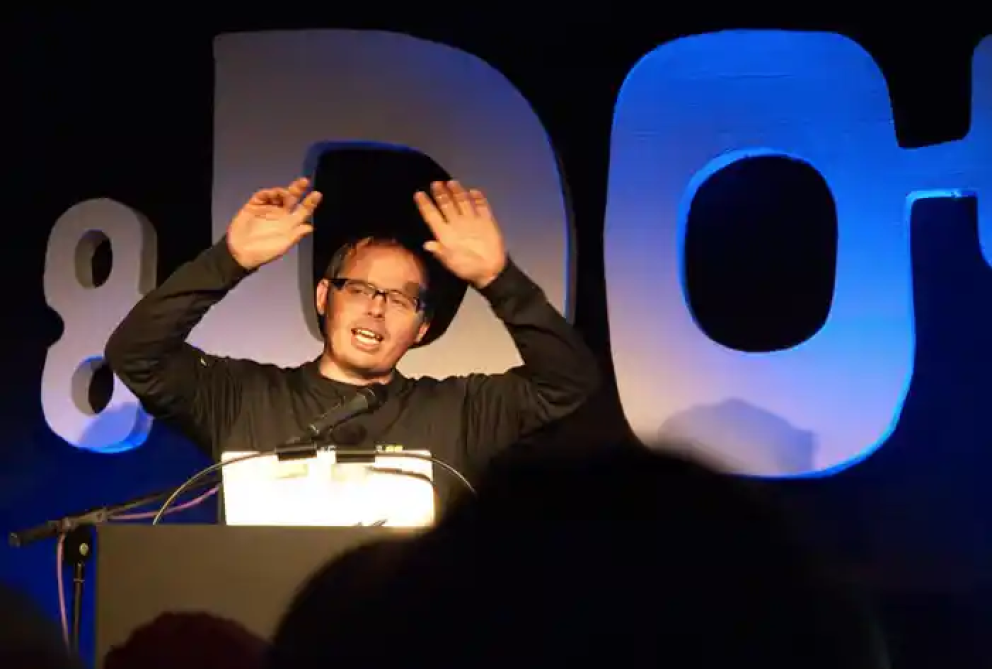 The Slowest form of death

I guess I must have done close to five hundred talks since I began doing what I love best: talking about myself, with audiences ranging from pissed climbers in the back rooms of pubs right through to CEO’s of blue chip companies in the City, from audiences of just two in a badly attended shop talk to selling out thousand seater theaters.  I’m not blowing my trumpet here, simply saying that when you talk about yourself that much that you learn a thing or two about speaking.

Because I do so much speaking, and also coach other speakers, I get a lot of emails from people looking for advice.  I generally send an email back waffling on about stuff, covering technology, style and format but thought that maybe by setting it down here I can just direct people to this instead.

Note that what I’m going to write about below really only relates to the way I’ve learned to do things, and may not be appropriate for others, and I guess the most important thing to stress is that you must not try and be someone else, but find your own style.  Also although I was a pc user for years I’m now a Mac user and find that Mac’s just seem to work better for AV stuff (they just work), some stuff may not work.

Although this is the first in my list it’s probably the least important, and no amount of technical Wizz can overcome a poor or badly structured talk, just look at all those crap Hollywood films that cost over a hundred million dollars but fail because they lack a solid storyline.

The baseline of any talk is that it should be possible to do it without any slides or music, as these things are there to support you, not the other way round.  People should be there to listen to you, not necessarily have you describe what the pictures are.  A good example of this would be one of those slide shows by a world-renowned landscape photographer, where you’re blown away by the first five shots, but fall asleep for the next hundred.  On the other extreme, you have someone like Leo Houlding who can pull a great talk together with just three slides.  A good speaker should be able to do a great talk with no images, and often the less you have to support you, the more you have to bring to the game, but if you can create a self-standing talk without images, and then combine it with great images and music and film, then you’re on to a winner.

Presentation software can sort of be split between three types, business, artistic and basic.

Windows Powerpoint (Office) or Apple Keynote (iWork) are the industry standards for the show, but neither come as standard with a computers OS, but with these, you can produce highly professional shows.  A free alternative would be OpenOffice as this has a presentation app within it that should work well. With all this software you can a great deal of functionality built-in that most people don’t know about, such as the ability to scroll through images on the fly unseen (while your audience is looking at the screen), and see the next image, timings and notes (as well as have fancy animations with graphics).

With the above software you can get images to click through with good transitions, but if you want something a bit nicer, including panning and zooming, then you may want to check out software like WnSoft’s picturestoexe (Windows) and Boinx Fotomagco (Mac).  Fotomagico works really well and was designed from scratch for creative presentations and has a whole raft of features that can produce amazing effects, including zooming in to images and various animation tools.  These apps create a sort of Flash-based file and so editing slides on the hoof is not as easy as with Keynote etc.

If you don’t have any of the above software then most image library apps will allow you to create a simple slideshow and this can work OK.  The last line is to make a film in Movie Maker or iMovie and export it as a movie (of course all timings will be fixed!).

Ideally, you need software that can be set up so that the displays are not mirrored (image same on-screen as that projected), as this allows you the ability to set up your presenter display so you can see the next slide before the audience, as well as the time and notes (if you use notes to keep them simple, and one-word reminders like ‘broken leg’ or ‘Hemeroids’).  With this feature, you can look like a real pro and know your material inside out, where in fact you just know what’s coming.  I’m running keynote and this is possible on that (set in preferences) and I guess it must be doable in Powerpoint.  To make it work once you’re projecting an image you need to go into your system preferences and turn off mirroring.

After your software probably the next important thing is a way of showing it, and here most people with being at the mercy of the venue’s projector and screen.  If you’re considering buying your own it’s no longer necessary to pay a fortune for good kit, as year on year the price seems to half for a good AV projector, while the quality of the image doubles.  For example, my current projector (BenQ MP777 projector) cost me £700 and is half the price of the prevues one and brighter as well, and works from small lecture rooms to big theatres.  The main cost of a projector seems to be its bulb (bit like printers) and so always make sure you allow the bulb to warm down before pulling the power.

Screen wise this can range from a white sheet to a state of the art blow-up screen, but the industry standard would be something like a Fastfold screen, which is portable and can be used for big audiences, while your normal roller style screen is good for smaller rooms.

Lastly one of the most important gadgets a speaker can have is good remote control, as this allows you to set the computer up and move on the images without the audience being aware of it.  Avoid remotes that have a mouse button, and just get a model that has a back and forward and a laser.  At the moment I’m using a Logitech R400 which works really well, although there are other cheaper remotes on the market (such as the Targus Presenter), or just use the small mac remote.

Beyond that, I’d make sure you have two long extension cables (two socket types), as these always come in handy, as well as a long VGA cable (avoid data cable as the image may well be poor).

Before we look at the ins and out of your content keep in mind that it’s better to leave people wanting more than less (something I often forget!), and keep your talk to 30 min, 1 hour or two hours with a break, depending on what you’ve got to talk about.

I guess following the rules of storytelling (a beginning, a middle and an end) are the starting point, while the hero’s journey (or Monomyth) is maybe something worth looking at, where you the hero set off on a quest, your quest is made difficult by outside factors that you overcome, you reach the end of your quest.  Simply telling your story about a trip where nothing happened and it was easy makes your story one of the dreaded ‘holiday snaps’ variety.

Don’t get bogged down

To keep your talk moving along you will have to avoid minute detail, like what type of shoelaces you had, or the food on your flight etc.  At the same time, you need to take your audience with you, and if you start with a base camp picture but don’t tell them where you are (Changabang base camp or Buxton) then that’s not good either.  A quick map works well with a big arrow, while you can give the essence of a journey with say thirty seconds of music, perhaps some Indian sitar music with an image of arriving in the airport, a shot in a taxi, a man stood next to an overflowing toilet, a bus shot, some porters with stuff on their head, a smiling porter, and finish with a shot of base camp - sorted.  In that thirty seconds you’ve cut out a whole load of twaddle people have heard a million times before, and instead taken them on a journey, and now you can get down to your story.

The use of music in a slideshow can be very powerful and is often a good way to finish a show.  It is best to build your images and music in a movie program (I use iMovie) then export it as a movie file (I use .m4v files as they are good quality and small).  These movies can then be dropped into your presentation.  Try and keep music mid-length (2 to 3 minutes) and slides show be visible for a minimum of 8 seconds, and using a ‘Ken Burns’ effect helps make the images more dynamic as well.

An audiences attention span is their age plus two, so most adults can sit for half an hour before it will wander.  This isn’t to say that they won’t sit longer, as this attention span is their ability to listen to your voice.  This means if you play some music or show a video clip, their attention timer will reset itself back to zero.  This also gives you a bit of a rest and allows you to have a drink.

I thought that it might be worth showing a typical template for a slideshow, that should allow you to create a neat and effective show.

The show is broken down into modules and solo slides that allow you to drop bits in and out and tweak the show for length or your audience.  The breakdown of the show would be:

This is an image or logo that is on screen before you start, rather than your screen saver or a blank slide.  Imagine this as being your theatre curtains.

A single slide where you introduce yourself and what you’re going to be talking about.  You can include how long you’ll be talking.

People like to know something about you, so throw in a slide of you as a kid, in the scouts, with your mum and dad.  Maybe add a story here that can relate to your slides later on.

Introduce how you got into your sport, including some early important experiences.

This slide or slides explains how the idea came about for your journey.  People are often very interested in this.

Keep this short but give the audience a feeling of being taken on your journey.  Try not to get too bogged down in this section.

Now you cover the bulk of your trip, the ups and downs.  Try not to be too detailed or too general, but flick between micro and macro view.

You reach the summit or the end of your journey.

Your main story has come to an end, and now you can try and draw and conclusion or lesson from your trip or life!

This is your closing curtains slide, so people don’t have a blank slide.

One way to give a chapter type feel to a show is to add a black slide between each block of slides.

Giving a good presentation is really rewarding, and can also be very profitable for climbers with a tale to tell, and how climbers have scraped together cash since the age of Whymper.  It can also be the slowest form of death!