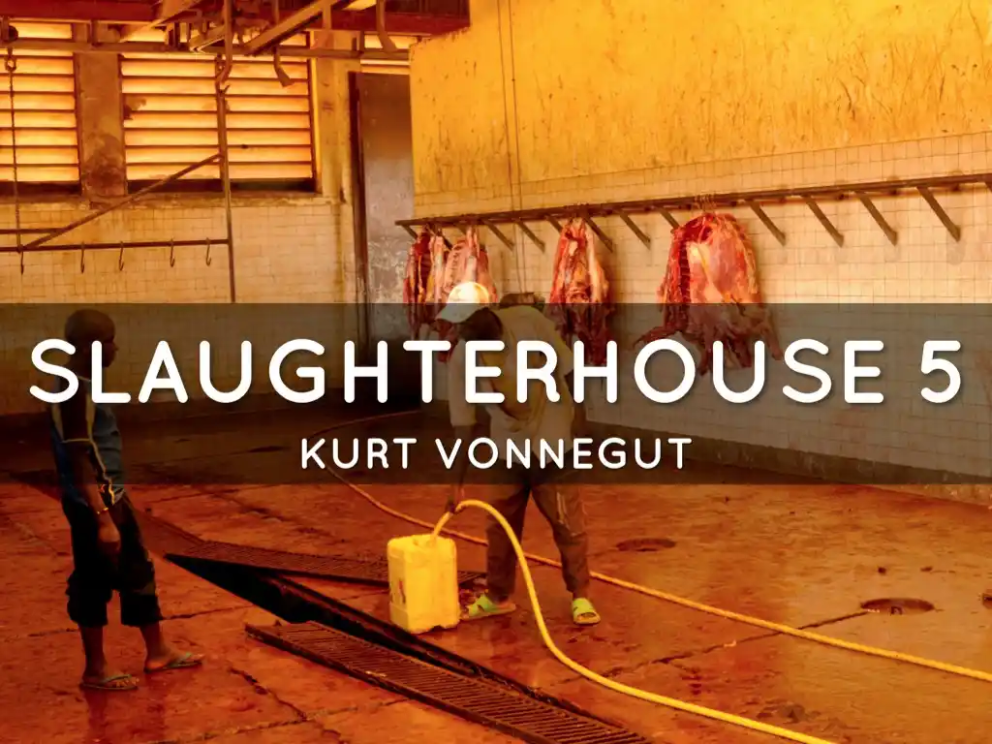 The thing that scares me

I played that song ‘Everybody’s Free (to wear sunscreen)’ by Baz Lurhmann to Ella and Ewen the other day, one of the best songs you could ever play a young person - well - as long as they’re old enough to listen (Ewen just sighed and said “this is rubbish, it’s just someone talking”).  If you’ve never heard it, then it’s based on something that Kurt Vonnegut wrote, a kind of list of advice for life, which sound naff, but isn’t (I’m a massive fan of Vonnegut, and loved the way he could deconstruct events, his life, and the structure of art, and lay it out for you - and in a funny way as well).  Anyway if you’ve never heard it then download it and listen to it a few times (while you’re at it buy a copy of Slaughterhouse-Five).

In the song there is a line about “do one thing every day that scares you”, that I really like - for the obvious reasons. When I played the song to Ella and Ewen in the car I wasn’t sure it was going in, their heads down fiddling with their phones as we drove to the seaside, but it did, as almost every day since then Ella keeps saying “Dad, this is the thing that scares me today”.

In between trips away, this fear is not particularly present in my life very much (I guess I can get several years worth in a week or so, so maybe I shouldn’t feel guilty), but I do miss it - that sudden flash of fright, or the gentle rumble as you press slowly into something you daren’t do - it can be as invigorating as swimming in a mountain pool (but only when you’re towelled off and the ordeal is over). I miss it.  For a while now life has been too good.

As soon as I start to feel happy I feel like I’m coasting, and then get that Protestant guilt about an easy life.  I moved to Hathersage in the Peak at the start of the school holidays, a place I’ve always dreamed of living since I was about 12.  There’s a bit in Psychovertical about it - where we’re camping in North Lees, I walk up to the top of Stanage and think that this is where I want to live. I’ve moved into Ben Bransby’s house while he’s away for a year - lets hope some of his grit magic rubs off on me!  I’ve got a new partner, Menna (who’s good at proof reading!) as well as an extra child (Ffion - a five year old!), which at 43 can be a bit tough - but there’s enough magic to make up for early mornings and terrible kids TV (I’ve tried to get her into some better kids TV and as a result she’s kept asking to watch iPop again - we had no idea what she was on about, until she started singing the Popeye theme tune.)  The kids are happy (Ella took a couple of exams a year early, getting three A’s - including one in Latin!) and I’ve got a job working with Montane starting in September.

But this is all a problem.  Just reading about happiness is both boring and a little sickening.  Maybe it’s just me, but I hate it when people talk about how happy they are, how in love, how centered - that their ‘transoms are alined’… blah blah.  I’m happy for them, but prefer a little more subtleness when it comes to love and happiness - so I apologise for the last paragraph (if anything though, it shows that you can go from the very pit of despair and unhappiness to somewhere close to happiness in six months. Doing it again - sorry).

A few months ago I was asked to submit an idea to Radio 4’s Four Thought program, a 15 minute monologue given to a live audience and broadcast before the 9pm news.  I thought ‘I can talk for 15 minutes - no problem’.  I put forward some ideas, and I was lucky enough to make it as one of the final four speakers, my chosen subject ‘risky play’.  It was only when I was told that I had to submit my text, get it approved and read it out that I felt my first stab of fear.  R-E-A-D I-T O-U-T L-O-U-D!!!  I can write pretty well, and I can talk pretty well, but the idea of writing and reading out my words was something else.  I’ve never been good at reading, having the reading age of someone half my age at school, and enduring hours of special lessons to get my reading up.  As a kid I was all about the visual, and words always scared me.  Worse still, I had that word terror, where I knew I was going to be asked to read something out loud. I would get the ‘terror’ and my mind would literally slow down to darkness, my thoughts so tied up with the fear of making an error, and showing myself as an idiot or retard, that that’s exactly what would happen.  Maybe that’s why I can stand up on stage and improvise stuff for two hours without notes - because I just had to learn to do without!

And so the idea of having to read out my words, an essay of over 2000 words, has been hanging over me for months.

After much tweaking I finally flew to Inverness yesterday to do the recording in front of an audience at the Eden Court theatre.  Pennie the producer picked me up from the airport and we drove back through the countryside.  She’d produced a program that Karen Darke had done a few years ago on adventurers.

I love Inverness, and miss living there - the city (well large town) a great base for adventures, being close to real wilderness, mountains and coastline, whilst still having a cinema, Waterstones and good coffee (god I’m really sounding like a coffee wanker now).  Driving through the streets I’d got to know so well, where I’d felt so comfortable, made me a little sad.  We all believe we know how our lives will play out, or hope we do, to fall in love, to have kids, to tow a speed boat on the back of a brand new Range Rover.  Some people can see their future so clearly because they know tomorrow will be like today, this year the same as the last.  What they lack in excitement they make up for in certainty, the tide between joy and despair neither high nor low.  They are not sad, nor happy, but make the sacrifice of not risking their hand for something better in case they’re dealt a worse hand - the certainty of their lives enough not to want more.  I’d always imagined myself turning into an old grumpy Scotsman there (I had the Scottish name, and can be grumpy), so it was sad to be back, knowing that strand of possible history had withered and died.

We drove to the BBC building and Pennie had me go over my talk for a few hours.  It had sounded fine at home, but now seemed terrible.  Where I thought I sounded like someone reading a poem, she thought I sounded like an emotionless robot.  Standing in a little room, just her and I, the Scottish rain falling from a grey sky, re-reading my words again and again, desperate for her approval - it made me feel as if I was 10 years old again.  I had felt quite confident before, but now I had nothing but the words.  “You need more energy” she said, and read my text back to me with more inflection, but to me it sounded too radio - too theatrical - like she’d turned into Tommy Saxondale.  I didn’t feel comfortable being anyone else.  “I’ll keep trying” I told her, knowing anything better than ‘not good enough’ was beyond me.

The hour of the recording arrived, and we all marched into our seats beside the lectern.  I was to go after Claire Cunningham, a dancer talking about how disability was ability.  As she spoke I just looked ahead, trying not to think about how she sounded, how good she was, her ability to sound as if she was just talking - not reading.  It was too late for me to become a professional, or learn to read properly, I just had to step up when she’d finished, find some energy, and give it my best - after all I never said I was good at this kind of thing.  My argument and ideas would have to be enough.

“Next up, Andy Kirkpatrick…” said the compare, and I stood up and walked over to the lectern.  My heart was beating so fast that the words looked like they were moving on my iPad - “get in control or you’re not going to be able to do this”.  I grabbed the side of the lectern and looked up at the audience, then swiped my iPad to start my telepromter app - the aim for me to not go to slow, or fast, so I’d finish in exactly 13.20 minutes.  ‘Energy, energy, energy’ I thought, as I looked at the first line, a line I’d read about three hundred times, but in my terror now made no sense at all, the words all backwards, their meaning lost.

I hesitated, and felt five seconds slip through my fingers.

“JUST IMAGINE YOU’RE TIM EMMETT” my brain screamed - and I did.

I arrived back in Manchester Airport around 8pm, found my car and slumped into it, turned the key, and retraced the same old route back over the Pennines, one I’d done so many times, coming home from work, speaking gigs late at night.  I always hated it.  The long slog up over the top of the Snake, down into the valleys, past Hathersage, then another hill to home, most often to an empty bed and dark flat.

As the car zig-zagged up out of Glossop I tried not to think about what I’d said, or if it was good or bad.  I thought about how I could be so strong sometimes, to leave what I had said or done in the past, never to turn and feel remorse or even pride, but at the same time how I was tied to the past, always looking back to see why I’m going forward in some direction. I’m never interested in revisiting what I’ve done (someone told me they wanted to delete an old blog post a while back, and I said they should have more respect for their past self) but the what I had done is who I am.  The program would be broadcast in November, I expect I’d not listen to it, and whatever people said - good or bad - I’d fake disinterest, too afraid to know for sure if I’d let myself down, too much of a coward to confound my low self esteem - that I’m shit.

But then, as the dark thoughts chased me over the top, as they had done for so long, where I’d once slipped into the dark lonely valleys of my choosing, it struck me that tonight there would be one less hill to climb, that down there in the dark was a home, it’s windows lit, food on the stove - that there was someone waiting for me.