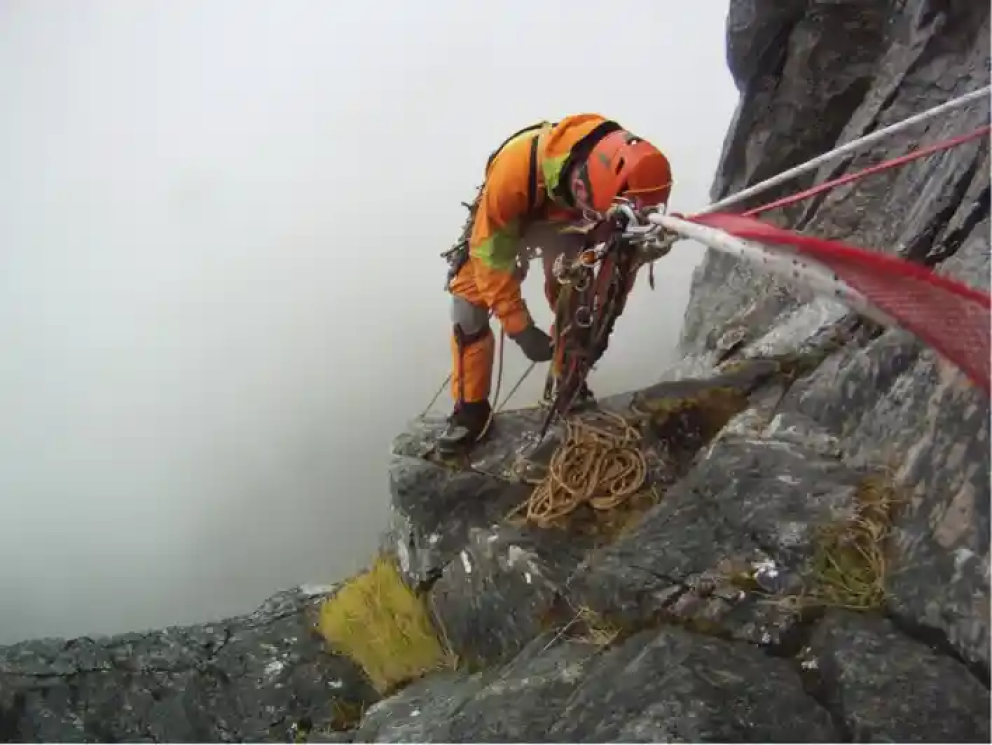 Pulled out all stops today (alpine start and cold cup of mountain fuel chic drink) and climbed 3 pitches - including what was probably the crux.

The heavens also really opened up today, and it was the first day on the wall I actually got wet. It’s also a sign I’m getting close to the top,  and if I run two pitches into one I just have two to go.

The sound of the rain was amazing as the whole wall came alive with rushing water, with waterfalls falling accross the wall, not to mention lots of rock fall. The mist also came in, and although it was very atmospheric (you could forget you were sky walking five hundred metres up), it also made the wall a lot spookier. Climbing up to the crux, a kind of Tremadog overhanging traverse (the whole thing felt as if it could collapse at any moment) the rock became really strange- sort of like alien rock, or rock that have been plastic with acid. Everything was just a mess of semi hard uck - and towards the belay I just blasted some big beaks strait into it ( effective but unnerving).

The rain stopped by the tine I got to the crux, which was only 15 metres, and was a mixture of free climbing and hooking (bat hooking). I’m glad it’s over.

The worst thing about climbing capsule style is all he jugging and scary abseiling, with my two static ropes spidering up 5 pitches - most without touching anything.  Every time I rap or jug I remind myself of visiting the Mammut factory and how amazingly strong static ropes are. It’s funny but after a while you can just switch off fear, sort of say ” nah - can’t handle being scared right now - and think about it later”.

Keep waking up late at night -around 3 - and just have a mind full of thoughts and memories and ideas. Being up here is one of the most profound things I’ve done, but can’t quite put my finger on why. Maybe by the time I drive a thousand plus miles home I may have an answer.

Quite a few people have said thanks for writing every day. I guess for me climbing has always been a creative experience, and writing and taking pics is just part of it.

Highlight of the day was getting back to the ledge and crashing out and listening to Dylan’s Blood on the tracks.