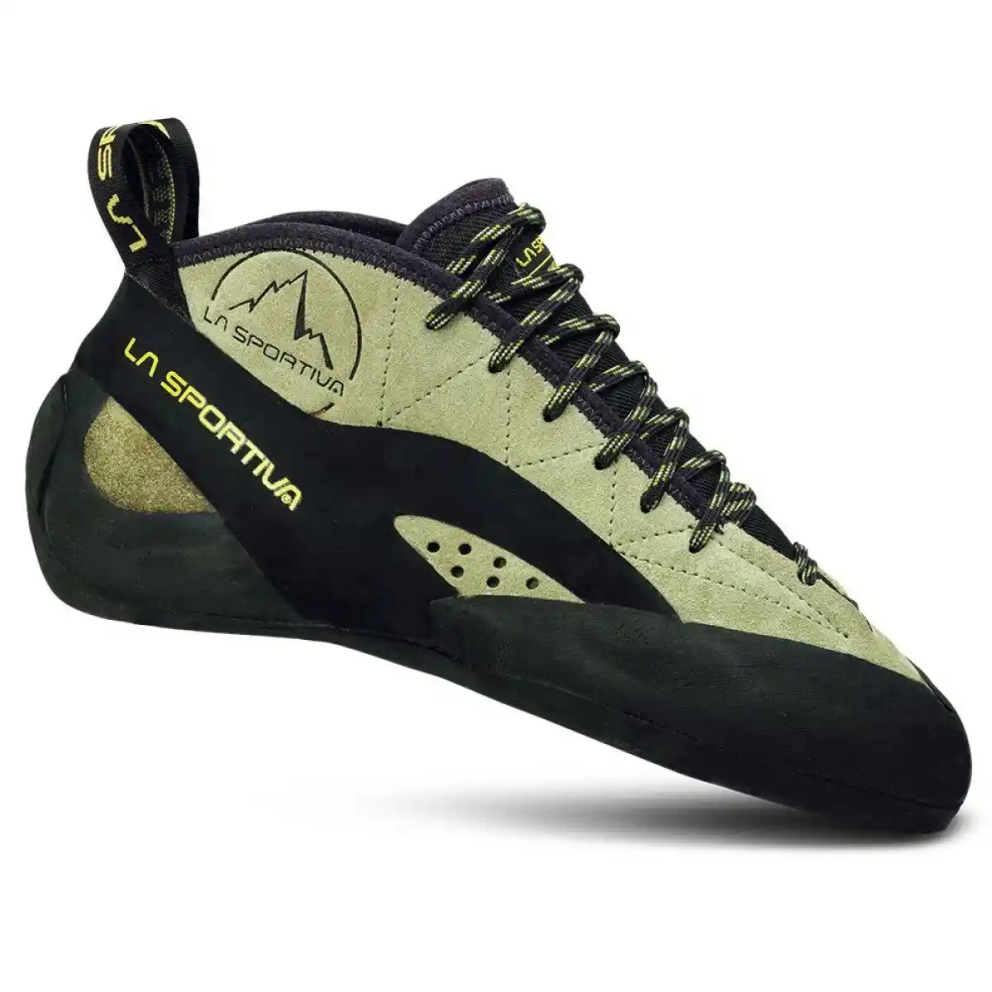 I tend to stay away from doing reviews these days, the reason being when you get a free kit or work with manufacturers I always feel people will think I’m biased. But then you use gear that really stands out, and so I thought over the winter I’d write a few gear focused pieces.

I’ve been using Sportiva TC Pros for a number of years, buying them over in the US as until recently they weren’t available in the UK.  The TC Pros are probably best known as the boots that Tommy Coldwell and Alex Honnold wear on their mega hard routes and solos, but they’re also the stable boot of most trad climber in the US.

At first sight, I thought the TC Pros looked a bit clunky and they were only popular due to being ‘good in cracks’ due to being stiff and high, unlike softer shoes and slippers.  If you do a lot of long multi-pitch climbs, by long I mean between ten to thirty pitches (and long pitches at that), you need a boot that has some meat to eat, plus one that will protect your ankles from cracks, and the TC Pros seemed great for this.  I’d been wearing softer shoes, or shoes that were stiff and clunky (old Megas).  In technical boots, even ones fitted with socks for long days I often found my feet either felt knackered and unable to stand comfortably on tiny holds for long after many pitches or toes got ground up when twisted into cracks.  When I swapped these out for the Megas I just ended up getting more tired and strung out as I never really trusted my feet.  I think granite climbing really asks a lot from a boot, especially long alpine granite where you can go from vertical smearing to micro nob climbing, then finger and hand cracks, off widths, then steep edges - all in the space of a few pitches.  For me, I also needed a boot that I could swap from aid to free when climbing routes like The Nose, Triple Direct, Zodiac etc were ‘busting’ some free moves could save hours on a climb, but getting a boot that didn’t leave your feet like mincemeat seemed impossible (swapping between boots is neither quick nor easy mid-pitch).

I was only after wearing out the only boots I had did I finally buy a pair of TC Pros (nothing worse than buying kit you could have blagged!), thinking that everyone else must know something I didn’t.  And they did!

First off, like an old pair of Boreal Ballets, the boots felt stiff - like really stiff - and very solid - very old school.  In the box, there was some guff about the technology in the boot, the sort of stuff that helps pad out reviews like this - like it has a bit of plastic in the toe, or a bit of carbon fibre - whatever.  In my experience, such things play very little role in the long term ‘broken in’ performance of a boot and are just marketing - to set one boot apart from another.  What makes a boot is its material, its last, and overall design (lacing, rand, heal design).

These boots were for long ‘alpine’ climbing, not cragging, so I fitted them with a very thing sock as I find these help the boots lock onto sweaty feet better, stop them stinking as much, and just add a lot more comfort when wearing a boot for twelve hours a day, day after day.

The fit of the boot is what I would probably call average, neither really wide or really narrow, with a slightly asymmetric fit, slightly toe down shape.  The leather is medium weight and wraps around the foot well and has a small degree of shape, but the 4mm Vibram rubber and rand keep this to a minim,  Comfort is increased by a very comfy padded tongue (some padding in the ankle as well), which also helps when jamming your feet into cracks (painful sometimes with soft boots).  The overall effect, once broken in, is of a very high-quality boot designed to provide as perfect a balance between performance and comfort across all climbing and rock types.  If I knew anything about cars I’d now make a witty comparison between the TC Pro and X model from X brand, but I don’t know anything about cars, so won’t.

Like I said it took a while for me to get to grip with these new boots, as it does with any new boot, going from something soft and floppy and shaped to your feet, to something hard and rigid and stiff, with edges yet to be dulled, the shape of the plastic last.  Yet very soon I began to get why these boots are so popular, the simple fact that they just make climbing easier!

First off once they soften a little and get some shape (your sweat and hot feet speed this process), you begin to feel that these boots create an impression of the procession, everything working to get the most out of your toes - the tip of the spear.  The boots do not feel clunky at all, and can smear as well as edge, and seem to have an amazing ability to be placed on a hold, no matter how small, and just stay there.  I often repeat the adage “A committed foot never slips” and these boots seem to be living proof of that.  I’ve done some pretty scary run out routes in these boots, like 40 metres with only one bolt (well scary for me), and I found that the ability of these boots to be just placed and forgotten (‘fire and forget’) just gave me a huge amount of confidence I didn’t have in other boots.  With softer boots, if you found yourself standing on a penny hold, for more than a few seconds you’ll feel the boot rolling off the hold, your foot fighting the win the battle as you tried to move on.  With the TC Pros you seem to be able to stand on micro holds and dots and feel more relaxed (maybe this is due to some techy jizz inside the sole, but who cares - they just work).  This pays off when trad climbing as you can get your weight onto a hold and more comfortably find gear, or simply not overgrip - a real problem when you don’t fully weigh your boots.

As you can imagine these boots are great in cracks, with the toe more easily being able to be twisted in, along with good heel hooking, foot stacking etc for other types of climbing.  They may not be perfect for pure full-on smearing, say bouldering on sandstone or grit, but they have enough smear in them to cope with what most climbers while have to climb.

The semi-relaxed fit of the boot is a boon when it comes to ‘alpine’ style rock climbing where there is a degree of walking and scrambling in the boots, as well as long belays and descents in your boots, really saving your toes in comparison to more tech boots.

The Pro’s use Vibram XS Edge rubber, which if you read the bumf is a compound that “compound delivers improved durability, excellent pure grip while adding a higher level of firmness for the most challenging of edging moves” …. blah blah blah.  For most climbers, the shit coated on your boots (mud - dried and wet - chalk - dust) is the great leveller, and in action - for most climbers - these boots are no better or worse than any other rubber when it comes to ‘stick’.  On the other hand, unlike other rubbers, the 4mm sole does wear very well, even when abused. The overall quality of the boot also means they can be resoled multiple times (I always use Llanberis Resoles, as it’s run by a climber and they do a great job).

The price of the TC Pros is around £130 which is probably double that of some cheaper rock boots, making them just about the most expensive rock boots on the market at the moment, and a big investment for some.  So are they worth it?  Well having shelled out for these, when I could have got others for free, I’d say I think they are, and on any hard route I’ve done, where I felt the boots gave me an advantage, I thought it was money well spent, the price of two pairs of funky climbing trousers.  Like I said above these boots are more of a long term investment than a cheaper boot, where the uppers last as long as the rubber (about six months for an avenge climber), as they can be resoled multiple times (far more common in the US than the UK).

I think that by and large most climbers, especially those in the UK, are climbing in a grade range between Severe and E3, on trad - single and multi-pitch, on outcrops and in the mountains - plus indoor climbing in the winter.  Many of the boots on offer come down in a trickle effect from hard sport and hard bouldering, where the climbing is more of a blitzkrieg, where pure performance in a few moves is ideal.  When it comes to pure trad climbing for this average ability you either get sticky Wellington boots or dumbed down high-performance boots that are often bought as being ‘the boot’ of the age, but end up being painful and not good at all types of climbing.  I feel the TC Pro, born from the crucible of hard trad, and designed and used by some of its hardest proponents (the Dawn wall the hardest trad route on the planet), is the ultimate boot for most trad at any level and is a boot that stands out amongst the crowd for good reason.  The feet are the drive train of your climbing, and not to use the best boots for the job, but to scrimp, is a mistake, as a win or lose it comes down to how comfortable you are when standing on a tiny edge, or your toe twisted into a parallel crack high above the deck, and for me at least I feel the TC Pros make that easier.