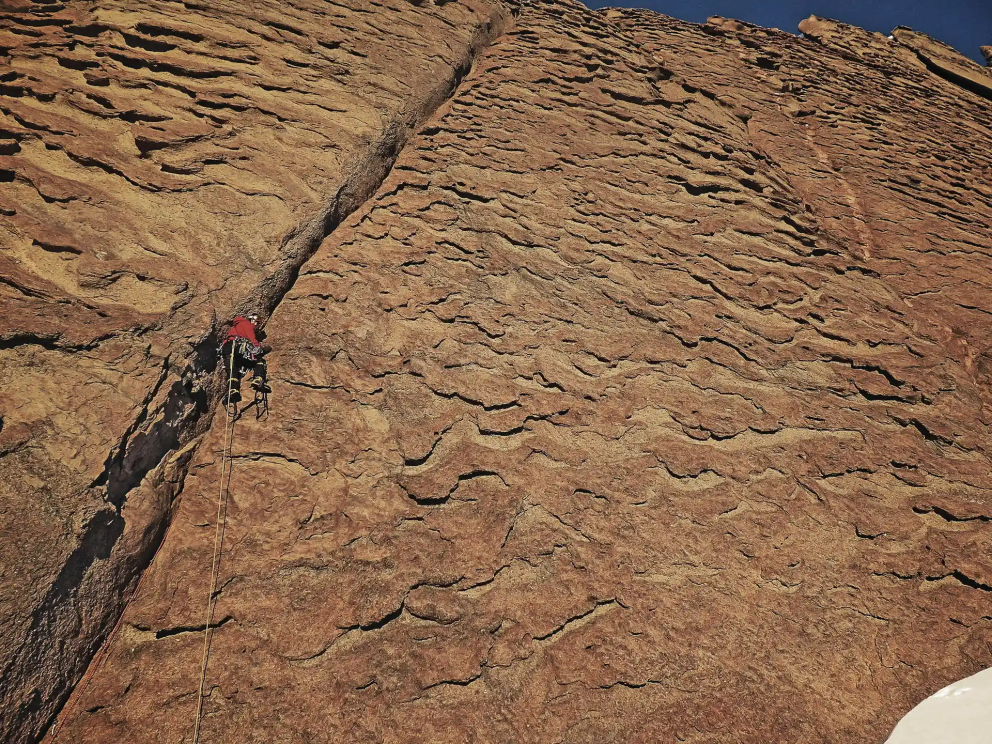 Ulvetanna: In the Jaws of the Wolf

I was in the climbing doldrums. A trip to the towers of Paine had been canceled in the autumn, and there was no sign of enough work to fund any future adventures, when one evening an email popped up on my phone:


Andy. I think I have a big project for you. Queen Maud Land. Departure 15 Dec, need you, all costs on me, tv-series, 2 months. Multisport adventure with climb and base and first ascents.

The mail was from the legendary Norwegian all-rounder Aleks Gamme (pro sky diver, Antarctic solo skier, Everest climber, etc.), who I’d climbed the Troll Wall with that winter (find a copy of Alpinist 44 for the article I wrote about that). It was one of those emails that you dream of getting one day, but that, when you do, you wonder if you really have the will (or the balls) to say “yes.” I looked up from the computer at my kids.

“Ella, Ewen, I’ve been asked to go to Antarctica for two months. If I go I’ll miss Christmas.”

They both moaned out a long “Noooooooo.”

“Really!?” they both replied, having seen Aleks in the film Crossing the Ice at the Kendal Mountain Festival the year before. “Oh you have to go if Aleks has asked.”

I turned up in Norway in mid-December and met the rest of the team: BASE jumpers Kjersti Eide and Espen Fadnes, camerawoman Ingeborg Jackobsen, 8a+ sport and ice climber called Jonas Langseth, and Aleks. I was still unsure just what we had planned, but it seemed that it would involve BASE jumping, speed riding, climbing and pulling pulks in order to explore the range. I felt a little guilty I had done virtually no work to prepare for the trip since I lived in a different country. I hoped I’d pay my way once we got to the mountains.

We were dropped into the middle of the “tongue” amid the famous cirque of walls and spires set in the shape of a wolf’s jaw. The Fenriskjeften Mountains are a dreamland for any big-wall climber. As the plane lifted off, leaving us alone beside a mound of kit, and the sound of its engines faded, a silence rushed in that was so total that its oppressiveness was almost too much to bear. Several times, on the hardest days, I would hallucinate the sound of traffic.

We built base camp and tried to get to grips with being there, making sense of our objectives and, most of all, juggling our competing projects.

After a five-day trip to climb what we thought was the highest mountain in the range (we got to the top and spotted an even higher summit!), we set to climbing our first wall, on the west face of Holstinnd. We climbed 10 rope-stretching pitches in as many days, slowed by heavy snow. The terrain ranged from dangerous A4 bat hooking and Scottish 7 mixed climbing on the worst rock I’ve ever climbed (the texture like stale bread and old cheese), to horrible chimney pitches. I did so many arm bars that I wore out the elbow of my jacket and learned that even the largest cam still leaves a sizable gap between a width you can aid and a width you can chimney!

Jonas and I climbed the route, named after a sci-fi film with Sean Connery that features a big stone head that people worship, in capsule style from a single portaledge camp. One 10mm bolt marks each belay. We did not place bolts in between anchors but did drill a dozen or so bat hooks since no edges would take a hook without breaking (several hooks blew even when using bat hooks). I took a 10-meter fall from the crux when a Tomahawk ripped after I hung on it for 10 minutes. Fortunately, two stacked beaks placed lower down held my fall.

By that time we’d had some very cold days (-30 degrees Celsius and colder), and began to understand that here in Antarctica everything is longer, higher, harder, colder and more extreme than it first seems. With this in mind, we prepared for our main objective: the unclimbed South Ridge of Ulvetanna.

The South Ridge route had been attempted at least three times (by a Spanish team, a French military expedition and by a team lead by Norwegian Robert Caspersen). The route comprised of a 300-meter wall topped by a long, technical ridge of rock that was either loose or LOOSE! Previous teams fixed the wall section, then tried to reach the summit in a push.

Robert Caspersen had been the highest, just three pitches from the top, but then, Robert had already made two first ascents on the mountain so knew its moods well. In fact Robert had asked us not to try the route unless we chose the purest style: no bolts, ground up, in a push. I shared Robert’s ideal, but also knew that similar lines—Robert’s Norwegian Route (5.10 A4, 960m), the Hubers brothers’ Eiszeit (A4 5.10d, 24 pitches) on the northwest ridge and last season’s first ascent of the Northeast Ridge (5.12 A2, 1750m), led by Leo Houlding—had been climbed capsule style, so relied on fixed ropes and some bolts. I also felt that the burden of the climb would rest on my shoulders, and that if we were to get six climbers on the summit at the same time, especially in January and February, we would have to employ those same tactics.

And so I made a plan to climb the route in phases, climbing and on-the-wall training for Kjersti and Espen. The crux of phase one was hauling a few hundred kilos of food, fuel, camping stuff (enough for six people for 14 days) 300 meters up the wall. On that day we where working for 24 hours, the end of which saw us literally crawling up to our camp dragging our bags.

The next day Aleks and Jonas arrived, bringing up our fixed ropes to use on the upper route and making escape back down to base camp impossible without a total retreat. Soon after, Jonas came down with food poising from eating some dodgy mince at base camp.

By Day 13, I was leading up a wind-sculpted horn of rock that I wasn’t sure I could free climb. Any hold protruding from the face invariably snapped off when I pulled on it. Halfway up I found a hole worn clear through the rock spire just big enough for my body. Over the course of the trip, I lost 15 percent of my weight, so felt lucky to encounter the tunnel at the end of the expedition, not the start.

Once through, I climbed up a snow ramp and pulled onto a tiny flat area perched just 30 meters of easy scrambling away from the summit. I fixed a line and returned to our camp below, wanting to summit with the whole team.

It was tense waiting in the tent, drinking tea. The ridge involved some complex terrain, and I hoped we would all be safe jugging up our fixed ropes one more time, to reach the summit.

Then at 7 a.m. on February 2, Aleks stuck his head in the tent. “Guys bad news, I’ve just talked to Oleg at Novo. There is a storm coming. He says we will be OK, and then I told him we were not at base camp, but high on Ulvetanna. He said we must get down.”

Clouds had built up around the mountains though we had been forecast clear weather for one more day. I started to dread what might unfold. After so many days climbing my body was falling apart. All my fingers and toes had lost all sensation, and I had mild frostbite on my nose and cheeks that had been buried in so many sunless cracks and chimneys. Hearing the Russian hardman at Novo telling us to get down was worrying. Several times I have been trapped on walls in storms. Each time, I was lucky to survive. Up here, with this team, in an Antarctic storm, someone, maybe all of us, may not make it down. At least not with all our fingers, toes and noses.

“I think we should set off now,” I said. In order to climb to the top, clean the upper route and fix and descend the lower wall before the storm hit, we would have to work through the night and following day.

“I also think you guys cannot jump,” Aleks said to the BASE jumpers. No one spoke for a moment. Then Espen asked why, and some reasons where given. It would require splitting up the team and supply of satellite phones, and they would land on the wrong side of the mountain with no support. I could tell Espen was shocked that this dream could falter now we were so close.

“What does Andy think?” and all eyes were on me. I didn’t want to make such a choice, but if a storm came I needed them here. Also, perhaps selfishly, they were no longer just BASE jumpers, they were friends who I had grown to care for. I was scared that this crazy climb could so easily become an awful tragedy. “I would like it if you came down with us,” I said, and Espen just said, “OK.” They left their BASE rigs at camp to eliminate the temptation to jump.

And so, after a meal, we each set off 20 minutes apart up the fixed ropes. As we gained height the clouds began to clear, and I had one of those “Oh fuck” moments. They could have jumped. After a few hours I arrived at the final pitch, the others forming up one by one behind me as I led the last loose snow and rock up to the summit pyramid. True to the mountain, even the last few meters felt serious and bold. Rock lumps the size of footballs crumbled and fell away as I moved up without any pro.

And then I was there: a summit with large fractured pinnacle. I looped the summit horn with the rope to stop me falling off and used my weight to anchor the others.

We stood there, atop a new route on what has been called “the hardest mountain in the world” (due mostly to its locality), and I think we all felt the same—flat and sad. If the guys had had their rigs they could have jumped. Conditions were perfect, and the exit was mind-blowing. I felt no sense of achievement. As with all summits, all I wanted was to get the hell out of there.

Thirty-six hours after waking, I dragged myself into to base camp, so shattered by the retreat down the wall that, as I skied along, it took all my concentration not to fall over. The heavy swish of plastic on snow no longer seemed to come from the pulk I was pulling. It was the sound of cars, rivers, people talking. The only thing that kept me going was the knowledge that everyone had made it down alive (and with all their fingers and toes).

If you want to see more images from the trip, then check out my Flickr page.