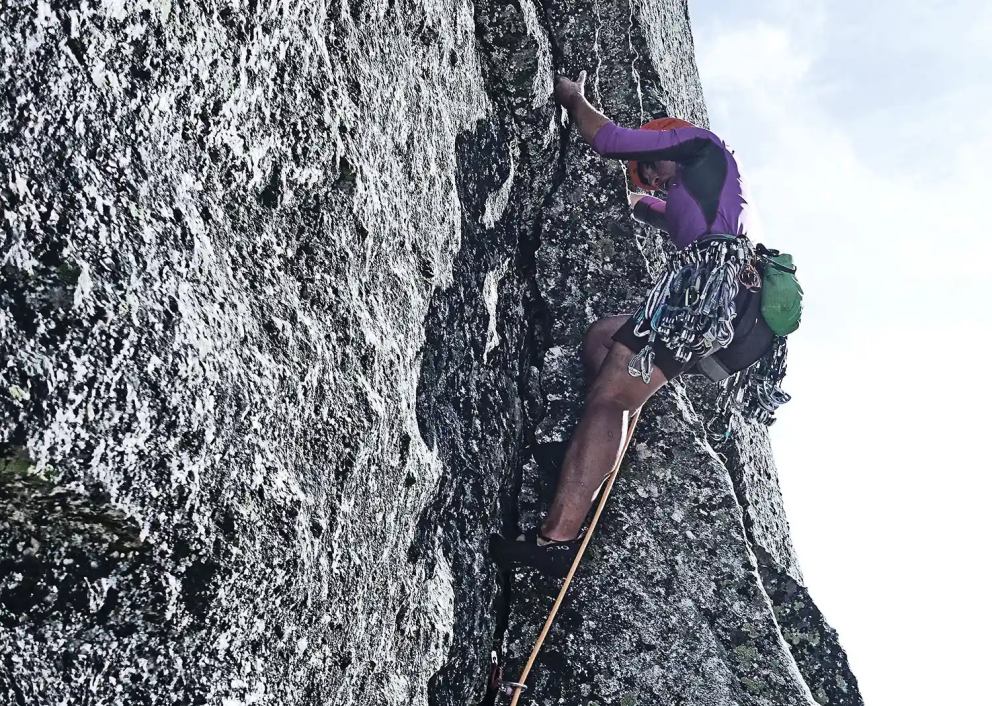 One line question ; )  I’ve read all your cam blogs but would like to know what use these days (Totems, Camalots, Aliens, Fixe, DMM)?

I probably take a slightly different approach to cams than most UK climbers, probably due to spending many years climbing the US, and also due to having done a lot of aid climbing. Someone once told me that what Mick Fowler was good at was finding protection and that always stuck with me, and so I kind of make that a priority. For me, a good climber is not one who runs it out, but who can sew up a route without getting bogged down in rope drag.
Most UK climbers have a full set of cams from little finger size to fist, plus two sets of wires and perhaps a hex or two. This is fine on most routes, being light, not too bulky on your harness, and leaves enough rack for leading and belays. On classic mountain rock routes in the UK you can often cut down on the cams and go with wires (take more draws), the same applying to UK non bolted limestone. In the US, when climbing on granite it’s more usual to climb with two sets of cams and one set of wires, as often the cracks are more parallel and clean, plus pitches can often be longer too, so one set of cams leaves you pretty run out. When speed climbing, free or aid, cams are also your best defence against lost time, going in fast and coming out just as quick, no fiddling with nut tools. On hard routes, cams can also be a boon, as you don’t need to hang there for minutes trying to get a wire to fit, attach a draw etc, just plug in a cam. Very often climbers go for wires so they can save their cams and end up with the cams unused at the end!
And so the way I use cams is a little unconventional, in that I carry a full set of cams, a mix of Camalots (2 and 3) and Totem cams (red, green, purple, yellow and blue), and then a second set of small cams, usually Totam basics (red, yellow, green, blue and Fixe black), meaning I double up in finger-sized cams. The Totem basics are sized in between the Totem ‘fancy cams’ (they don’t seem to have a name, and end up calling basics ‘aliens’ and Totems just Totems), plus the basics are narrower, so often one cam with fit better than the other. Totem cams can also go where no other cam would work, both shallow placements and two cam placements. If I’m climbing on harder routes on granite, where protection can be hard to place then I add a set of Black Diamond 3CU (3 cam units) cams (000 to 1). These have their draws cut off and are racked on a single karabiner like nuts, and mean I’ve doubled up on my small cams now, with the 000 being smaller than the black Totem. Here again, having a variation in size and width, plus the cams ‘footprint’ provides a huge advantage. A C3 cam will go where a 4 cam unit will not, and works really well in very shallow corners, was only the inside and centre cam are in the crack, and I’ve placed these in places most people would only get a crapy microwire. Cutting of the draws is no biggy as these BD C3 are actually rigid really (when flexed sideways), unlike basic (which you can almost tie in knots), so always needs to be extended.
This rack is what I use on most routes, easy to hard, because on easy routes I just place cams and climb fast, while on harder routes I can get gear in faster (maybe I trust cams more than most!), but also get gear in when others may not.
The weight difference from these cams, when set against speed and safety is well worth it and is absorbed pretty much by employing super light krabs (Petzl’s plus Edelrid Nineteen G, which I really like), as well as using lighter nuts like the Wild Country Offsets (which I highly rate.)
If I was heading off onto a big wall, or some big crack fest (rare in the UK), I’d double up to Camalot 2 size, and maybe add a size 4 as well, and I often carry a yellow Link cam, as this goes from a Camalot 2 to a Camalot .75 (I think).
So there you have it, not a lightweight set up, but one that works well for me (but I am a bit of a wimp when it comes to protection).  Oh, and one last thought. Most climbers seem to rack their cams in size order, usually small to medium on one side, larger on the other.  A more functional way to rack cams is to place less used cams at the back (black and blue micro cams for example), having the go-to cams (finger-sized front and centre).