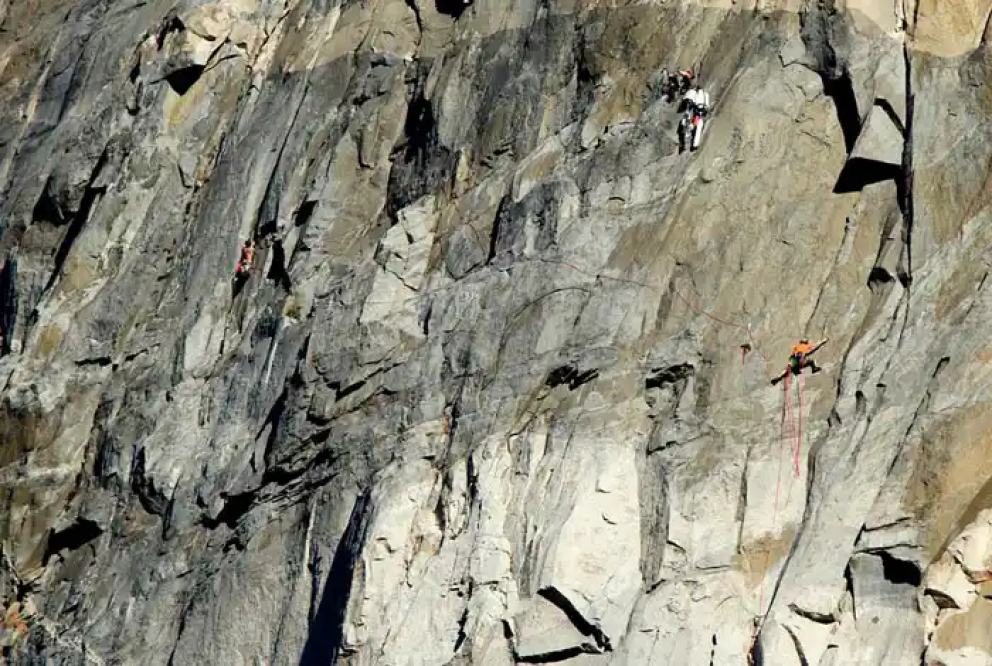 What to Use for Simul climbing back ups?

First, thank you very much for all the articles you post on your site. Extremely instructive and useful.

May I ask you some question concerning simul-climbing and protection as you describe it in this article?

ENSA has released a couple of videos about tests performed this summer, and in one of them there is mention of the Tibloc being used to prevent the fall of the second to pull the leader.

The question is about Tibloc vs. Ropeman vs. Duck vs. Magic Ring vs microTraxion vs….... Are they all equally suitable?

I doubt it but I’m not competent enough and have not access to the relevant info (and data) to come with a valid answer. Then better check with an expert.

There is a Petzl data sheet detailing the use of the Tibloc for simul-climbing protection, however Petzl strongly advise against using a Tibloc for self-belayed solo which unless I’m mistaken is a configuration rather similar to that of the second in simulclimbing.

Furthermore, Petzl advise against using a microTraxion for top-belaying a second because of the risk of tearing the rope sheath.

Once more this configuration appears (to me at least) rather similar to that of a second in simulclimbing.

When checking with some ENSA instructors, I was told that during these tests they didn’t observe rope damage with a Tibloc used in this configuration even with 2-3 m slack between the second and the Tibloc. And some said that they use the Tibloc even with an Ice Line without any problem.

When I asked about the Ropeman or a Duck instead of a Tibloc, I was told that the spring loaded cam mechanism can be disrupted by snow and ice thus preventing its proper function.

As you can easily understand, all this is highly confusing.

What do you think?

Thank you very much for your help.

A Tibloc works differently than any other mini ascender as it doesn’t work via a moving toothed cam, and rather works more like a cleat.  Although super effective, camming ascenders, by their very nature of biting onto a rope, will damage the rope if overloaded, even bite right through it (easy to do on a half rope if you really shock load it).  Camming pulleys, being mechanical can also be affected by cold, ice and snow or dirt, stopping them from locking onto the rope.  The Tibloc having no moving parts isn’t affected by any of these things, but the drawback is that a Tibloc requires a much greater level of skill and practice to use effectively and safety (they will trash your ropes if used badly, and also plainly not work).  The other style of ascender that can be used is the Russian rope cam style ascender (as seen in old Troll/Yates Rocker and Camp Lift).  This is the style of ascender recommended in Speed Climbing! By Hans Florine, but I suspect this is as much down to fear of litigation as effectiveness, as this style of ascender is way to heavy for alpine climbing, and I’d probably go for a Petzl Basic if it came down to a toss-up of heavyweight ascenders.

So what to choose? Well, the very nature of simul-climbing is highly dangerous (sometimes just taking off the rope and soloing together is safer), and so any technique that makes it less so has to be adopted.  To make it work see my article, and by following the rules set down in the Petzl PDF you should achieve about a 90% increase in safety (as long as you follow the points in my article about the second not climbing faster than the leader, placing plenty of pros, and climbing well within your limit).  But what to use?  Well Tiblocs are light ad they’re the ascenders I carry on my harness, so for me, I’d used them.  The one main point is that THEY MUST be used with the correct karabiner; a round bar oval or HMS.  If you use them with anything else they can be unpredictable.  Make sure the rope passes THROUGH the karabiner, and the rope diameter works smoothly with the Tibloc.  Does that mean they’re better than ropeman etc?  No, it just comes down to what you know and how you know how to use it.
The bottom line is protected simul-climbing It’s a great technique, but must be used with great care and an understanding of its limitations.

note image above is from El Cap report by Tom Evans.