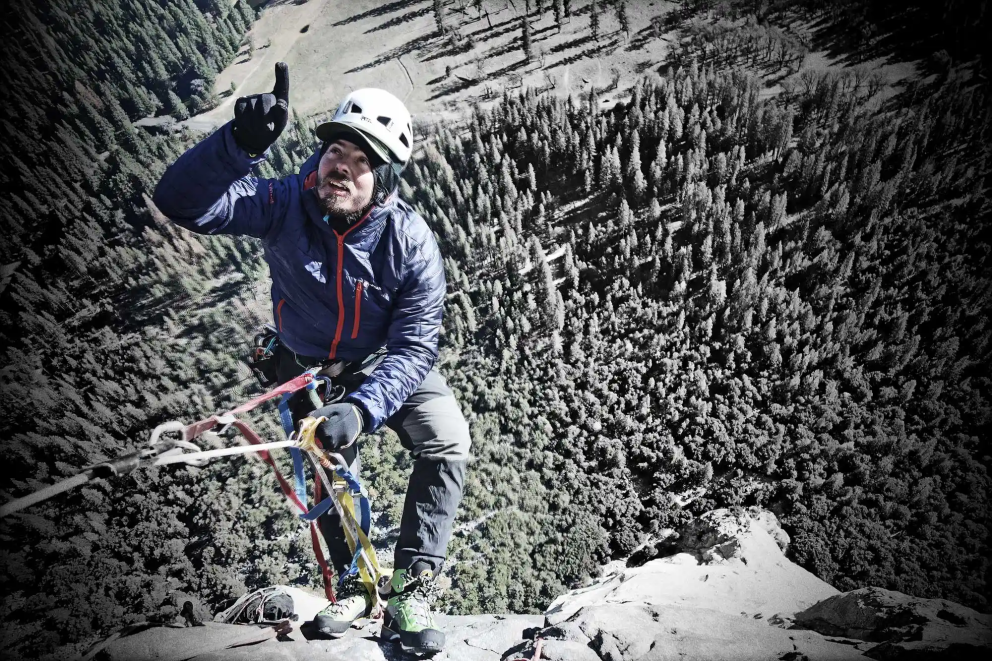 When to shit your pants

Firstly, great blog. I am a fellow Brit living over the pond (USA) and really enjoyed some of the things you have written on the Micro Traxion.

Despite being an avid climber and mountaineer (I am planning to ascend Mount rainier next month) - much like yourself - I have very surreal fear of heights which I assume is a fear of not only falling but also a fear of the gear giving in (carabiner breaking, rope snapping etc). Do you have any tips for combating this? It seems to always happen as soon as I am a few (~15) feet off the ground.

Thanks for your email, Matt.  If you’d asked me this twenty years ago, when I first really got into hard climbing, a time when 9mm carabiners often broke in a hard fall, ice axe picks and crampon points often snapped, when ropes fell apart or became a disaster in a single day, well I’d have still said the same: “It’s all bomber dude!”.

The chances of having a material failure in a rope, krab, harness, nut or cam are tiny even if set beside the chances of been eaten by a shark, which as we all know is less of a hazard than being killed taking a selfie or being crushed by a vending machine!  It’s easy to get sucked into the nerdy side of climbing, much beloved of forum lurkers, but if you ignore theatrical ways to die (a 7mm cordelette soaked in urine then shock loaded off on Wallnut 00 that had been subjected to kryptonite).  In the past gear was over-engineered because people had only the most basic understanding of the forces involved, things like cross-loading what you do to messiahs, ergonomics saved for sex toys.  Back then krabs were made from 12 mm bar that was bent into shape and weighed in twice or three times what current meat and two veg biner do.  Back then most people climbed on two 9mm ropes (in the UK) or 11mm singles, the idea of a 10mm as radical as climbing on a single 8mm would be now.  Gear was strong and heavy and lasted and lasted, a Troll harness bought back then in the 70’s probably still strong enough to pass CE tests today, the slings we used (Troll Superblue) the kind of thing you find holding down steam engines on the backs of flatbed trucks.

Companies like Petzl, BD, HB, Troll, DMM and Wild Country pushed the market to a lighter way of thinking, the need to perform at higher levels requiring lighter gear (software and hardware), or maybe lighter gear helped people perform, I’m not sure?  Harness’s like the Petzl Crux or Troll 9a appeared designed for the bleeding edge of climbing, along with RP’s and 9mm krabs, 8.5mm ropes (and 8mm twins), lighter plastic boots etc.  Most of this kit was meant for people at the edges of the sport, but soon what was extreme became the norm, only those stuck in the past using heavy kit, hot and cold forging (pioneered by DMM really) hardware took over from bent rod biners, Dyneema and spectra appeared, and computer stitching and better testing slimmed-down most everything else.  Also climbing became less niche, with sport climbing taking off in Europe making it climbing gear manufacturing no longer a cottage industry (and so those who could not adapt to this disappeared, companies like HB, Troll, Mountain Technology, Faces).

And so now we’ve got the best gear ever, no major company daring to make anything that could in any way spoil the party, no room for shit or shoddy products.  Also, believe me, having climbed with a lot of old-timers, when you see a product recall the actual danger is pretty non-existent, and for everyone that gets called back there were ten much worse issues that were just brushed under the carpet.  Take a normal biner for example, hot forged and weighing in thirty grams, a wire gate that stops gait flutter, and strong enough to hold a falling gate open, gate closed, or cross-loaded, you’ve never had it so good!

Yes there have been some issues with offshore products, and strength does not trump design, especially in harness’s (there are some really shitty harness and buckle designs out there), but nothing that’ll kill you.

Building trust in gear is a cross between blind trust and trust in yourself.  Buy gear from companies you trust (3 sigma rated), inspect your gear, look after it and learn how to use it.  If you’re going to have a bad outcome from days climbing due to gear failure 99.999% of the time it’s down to you or your partners fucking up.

Ignorance is not bliss though, and I would advise all climbers to check out the AAJ Accidents data base online, an invaluable resource when it comes to learning from lessons written in blood.

And yes ropes do get cut (the worst-case scenario really) but only by people who fuck up in some way (don’t factor in ropes are made of string and don’t like falls onto razor shape edges, or who don’t understand loose rock), or are employing a single rope when two would be better (most alpine rock climbing, where climbing like Alex Honnold on a single 9mm can be a death wish on anything but bulletproof granite).

The bottom line is to get yourself enough experience to know what to worry about and what to ignore.  Make sure your partners are up to scratch and if they’re not then treat them like you would Sweeney Todd giving you a shave.  Learn about real-world forces and what makes gear break (so as to avoid it), and learn how to maximise the strength of gear through current ideas on how to use it, plus add a healthy dose of positive paranoia to what you do (a lot of people I know who got fucked up had too laid back an attitude to safety, while others were the opposite but focussed do much on what-ifs and maybes that they missed the tiny real details when something bad was going to happen). So educate yourself and your partners and seek answers for yourself and understand what’s needed: read it, listen, ask and do - and you’ll know when it’s ok to to ‘bomber dude’ and when to really shit your pants!