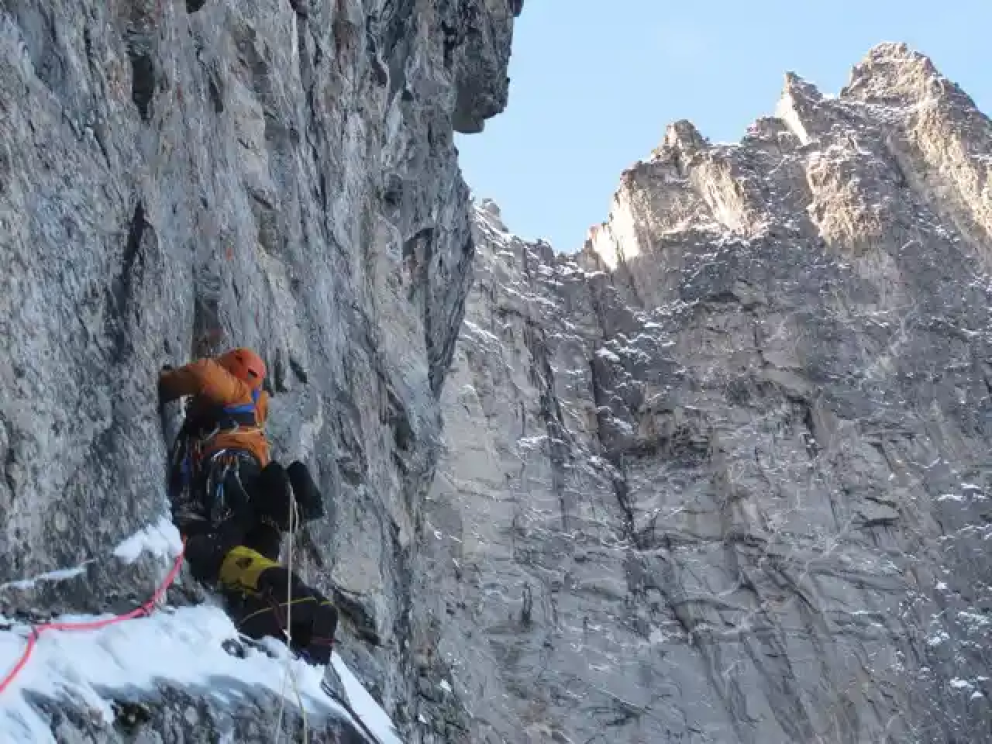 Conditions: Super calm but cold (down to minus 20), with some wind and snow on last 2 days of climb.

Route description: Technical and steep, mostly safe, but with most pitches having loose features to avoid.  Bolted belays and some lead bolts (many of dubious quality), as well some rivets and minimal fixed gear (copper heads and pegs).
Description of climb

In September 2011 I (AK) tried to make a solo ascent of Suser gjennom Harryland, climbing 17 pitches over several days, but turning back on the last 30 metres, due to a lack of water, time and an a “feeling” that it was time to turn around (my camera switched on as I decided what to do, playing a clip of my son Ewen saying “Dad - get away”).

Since then I’d had it in mind to return and finish the climb in winter, seeing it as a great winter line (safe-ish and very steep). The problem was no one wanted to climb the Troll wall in winter, either because they believed it was super dangerous (“hasn’t it fallen down?”) or just super grim (they were right).  In the end I had to forgo experience in return for plain enthusiasm, teaming up with two non climbers, who had never climbed a big wall, and one who had never led a traditional pitch (“I’m really just an indoor climber”).  This may seem like a rather odd/foolhardy thing to do, but then I have a lot of experience in climbing with ‘non-qualified” partners, and know that you should judge a potential parter not by their ability to tie knots but by their other attributes first: sense of humor, resilience, a track record of having performed in a trying environment (mentally and physically) before you make a decision about their ability to climb a wall.  Although thin on wall climbing skills, Aleks and Tormod had more than enough to qualify for such a climb (Tormod was the 1st person to ski the North face of Everest, and Aleks was the first to ski solo too and from the South Pole).  Having never climbed with either climber, I promised I’d lead all the pitches I judged as being ‘not for beginners’ (meaning I led all but 15metres of the route) and taught them the basics via email (jumaring, cleaning and hauling).

We finally met up on the 13th of January in Oslo and packed up all our kit for the five hour drive from Oslo to Andelsnes the following day, making our first carry (with help from locals) up to the base of the wall.  My first worry was how cold it was, the temp even at such a low altitude being -18 deg C, with a light wind.  I began to really worry about being able to stay warm on the wall, and the seriousness of a winter ascent on the Troll (I’d spent a week trying a new route on the wall in the winter of 2002, so I did have some experience of the ‘Scottish’ conditions you can encounter there).

Over the next few days we fixed up the wall, the climbing being slow due to the very short daylight hours (8ish to 4ish), and the cold (free climbing and sky hooking required bare hands).  The climbing was all familiar, meaning it was a little faster, but to begin I climbed only 1 pitch a day until we reached pitch five, when I could begin ‘short fixing’, and the pitches increased to 2 a day.  Some of the belays were in poor conditions (corroded or rusty bolts), and a new bolt was added to pitch 2, 1 to pitch 3 (this belay comprised of 2 rusted wires in a block wedged in the gully) and one to pitch 18 and one at the final anchor (another rusty wire).  The route was already heavily bolted, and although many bolts were in poor condition (low strength Petzl 8mm caving bolts with alloy hangers) no bolts were added to pitches.  Anyone making an ascent of the route should consider rebolting the route properly (I added a Petzl steel 10mm bolt to one single bolt anchor in 2011).  As an aside there are a number of Russian removable bolt holes on the route, which should be filled in and patched (I had 2 Russian removable bolts, but only used them where these holes were drilled at pitch 5 and 10).

The climb was carried out ‘capsule style’ fixing ropes up from a camp at pitch 5 and 10, allowing the team to rap down at the end of the day and maximize climbing time.

After around 12 days of climbing we reached the final pitch, which was climbed in stormy weaver (the last 3 pitches were covered in ice, making them the hardest to climb) to the final anchor (rusty wire and unidentified anchor enchased in ice).  The team descended back to pitch 10 in the dark, and the ropes left so we could confirm we’d actually made it to the top, before stripping down to 10 the next day.

We’d hoped to climb up to the top of the wall itself (all other teams apart from a Russian team who thought they were on a different route, had rapped the climb), but having led all the pitches my fingers were in no state for hard mixed climbing on the Troll pillar.  Because this had been our plan we’d not left any fixed lines below in order to get back down the overhanging and traversing route, meaning it took us a further day to climb/rap down the wall below.

How did the big wall students get on?  Well apart from being a great deal of contraband that made hauling even harder than usual (we had 10 litres of fuel left, as long as a large frozen salmon, bacon, a solar panel, enough batteries to power a small city), they soon got the hang of big wall life, dropping very little and soon adapting to life on a wall.  I look forward to climbing with them again.

There was some confusion/controversy about the climb after we got down, which may have caused offence to local climbers, as both Aleks and Tormod spent a lot of their boring belay duty facebooking and talking to Norwegian media (radio, TV and print), leading to some inaccurate comments by the media, such as the route “was the hardest”, and that we were ignoring the first ascent of winter by Sigurd Backe, Rolf Bae, Sigurd Felde and Trym A. Saland in 2007, which had missed the technical winter season by 4 days (they had had worse weather than us, but also much weather that was 10 degrees warmer and much more daylight - plus they were all climbers!).  It’s also true that we did not ‘climb the Troll Wall’ in winter, just ‘a route on the Troll wall’.  Perhaps that will have to wait until next year!

On our second night in the valley we gave a talk to the local climbing club (a club with more gnarly climbers than any other I suspect), and I hope they could see that we were not media hungry big heads, making a big deal about a climb that was hardly even on the wall, and simply three fools looking for some cold adventure.

You can see more pics from the climb here on Flickr.