When I’ve finished writing Cold Wars (should be out this summer, with my deadline being end of March), I’m self publishing my next technique book (Driven being the 1st), a book called Down; which covers everything you need to know about not dying on the descent (£1 from each book will go to the Conville Trust), and a book called Climb Logic (the money from this will go to help my kids get to Eton, and so rise to the top of the Conservative party).

Climb Logic won’t be like your normal ‘how to climb’ book, as it will simply be a list of things that in the past you learned from a more experienced leader, stuff that isn’t normally covered in books.  It’s also going to be unapologetically personal in what it tells you, covering what I do, even if it’s not the best way to do it on paper.  Anyway over the next few weeks I’m going to be sharing a few draft topics from this book, mainly things I think may prove valuable for winter climbers just as much as summer ones.  I hope you enjoy them.

If there’s one piece of gear that can cause you serous hassles, cluster fucks, faff and near terminal snags, it’s slings.  The modern super skinny slings just seem to make this even more likely, tangling up, getting knotted together, or clipping into what thy shouldn’t far more than those old school Troll super tube tapes the width of a mars bar.  When you climb with novice climbers it’s a thing you notice often, both when leading and when seconding, but with a bit of forethought it shouldn’t be the case.  And so here are a few ideas on how to tame those unruly slings.

Organization is key when it come to slings, and if possible try and have a set colour for each size, say grey for 240cm, red for 120cm and purple for 60cm.  If I had my way I’d make it a EU directive - like cam colours, as there’s nothing worse than using someone else’s rack and finding at the belay that that rats nest of sling you thought to be a 240cm is in fact several 60cm slings.  By having set colours you should avoid getting the right sling first go, and is vital when it come to rack slings on your harness instead of over the shoulder.

Having your 60cm slings over your shoulder is the norm, meaning you just yank it off, stick it on a spike or a runner and away you go.  Unfortunately in winter this is often not the case, the sling being stuck under a rucksack, trapped by an hand a leashed axe, or generally tangled up in a right fucking mess.  Also having sling rapped over the head can be dangerous in a fall, as I once found to my cost, a sling clipping into a piece of pro, instantly stopping me and nearly ripping my head and shoulder off!

A better way is to form them up into extenders and just clip them to you harness gear loops, or to your chest gear loop (better for winter), allowing them to be easily excessed.  This way also gives you more extenders or 60’s with two krabs ready to be used.  These slings are great for clipping cams, as the cam’s krab can be clipped into the sling and then the sling extended and clipped to the rope, the free krab (one krab is redundant as the cam krab was used) either left on the sling so it can be re slung as an extender, or snaffled for other uses (generally better to do the former).

If you need to make an extender out of a 60cm sling just use the technique below. 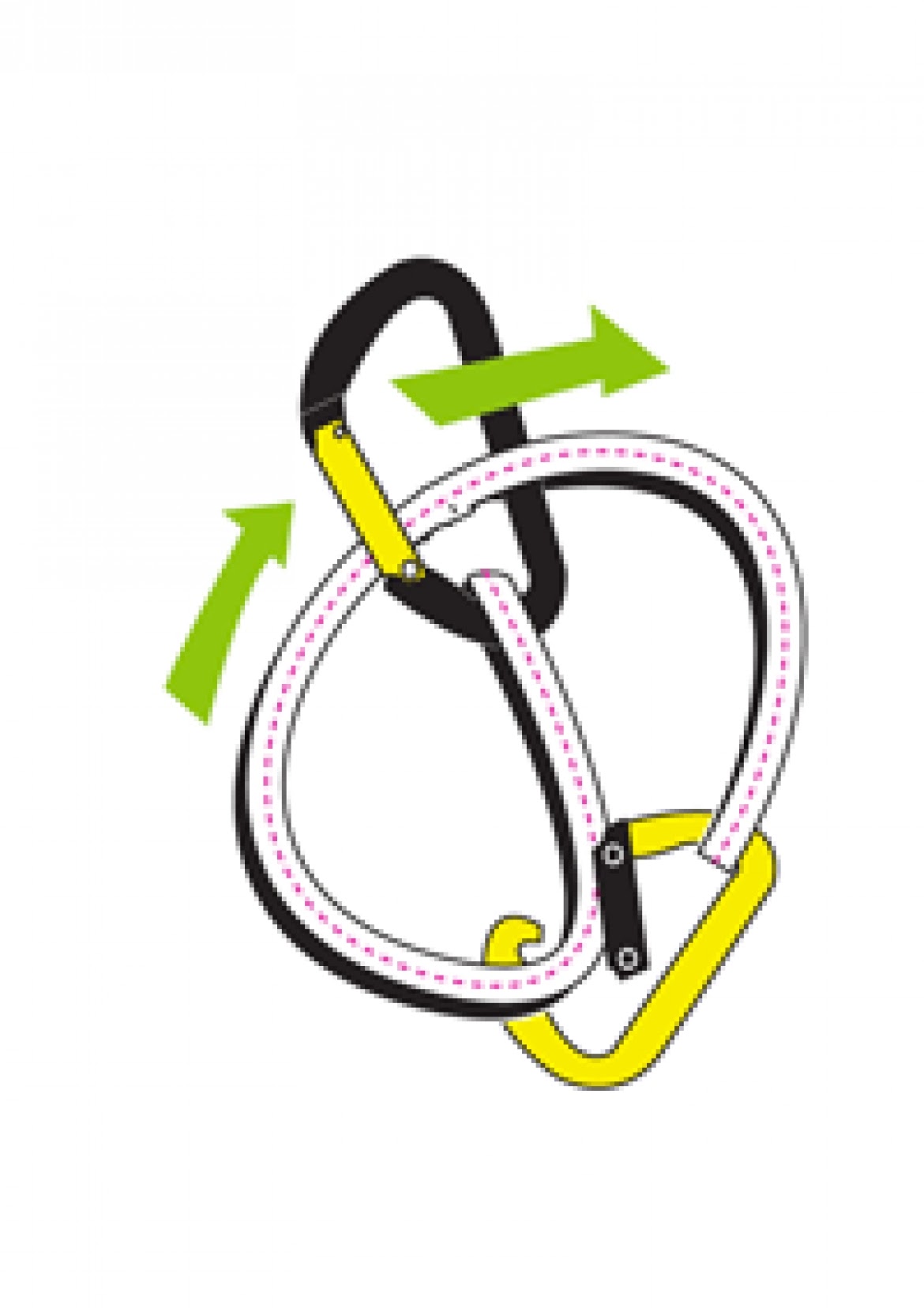 The same rule applies to 120cm and 240cm slings in that it’s better to have these on your harness than around your neck.  To shorten 120cm slings simply re clip until you have a length of looped tape around 60cm long, place your finger in the loops at the end, holding karabiner at the other, then twist around and reclip the top loops into the karabiner, or use a second karabiner.  240cm slings can be racked the same way.

Don’t be a lazy second

One of the biggest sins a second can commit is to not rack the leaders slings as they come up, either just gathering them up with all the gear still attached and clipping it to their harness; leaving loops to tangle, or worse still just letting them hang from the rope still attached, generally a disaster waiting to happen.  To make matters worse, if they make it to the belay without tripping up and breaking their neck, they generally hand over a clusterfuck of slings and krabs and nuts and cams and let the leader sort out the mess.

A good second should be fast but also be in mind of the next pitch, making sure that the gear they take out is racked and ordered ready for the leader.  Sling should be re slung into extenders and the gear taken out, or at least sorted.  By cutting corners you just slow everything down and make a mess.

BTW I’ll be doing my final Off The Wall show at the Buxton Opera House on the 14th, details here

A Mars Bar bar costs 60p. Were these words worth as much?

The Hurt of Doing