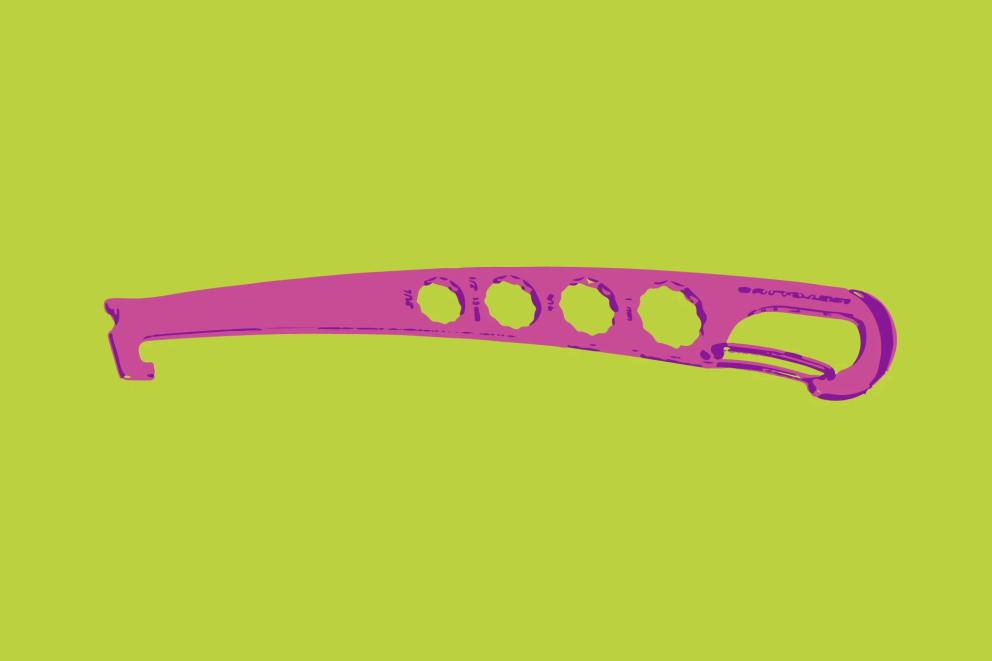 If your harness was running some kind of hardware caste system you’d have flashy cams at the top, followed by nuts (micro’s coming before the less sophisticated chunky nuts), then the quick-draws, the foot soldiers of their betters.

Now I think most people have got their nut tools all wrong, and that if you learn how to use one properly it could save your life!

Here are a few things worth thinking about next time you clip on your nut tool.

A tool for life, not just for seconding

Most climber only sees the nut tool as the weapon of the second, forced to dig and battle stuck cams and nuts, and some climbers only have the second carry a nut tool.  In fact, no leader should ever go on the sharp end without one, primarily because nuts can easily get stuck when leading as much as seconding (annoying ones that are crap, but get stuck when you try and get them out to put a better nut in!).  Also when placing microwires, or really tricky wires, a nut tool is vital to get a good fit as you can press or ‘stab’ the nut in (much better than a finger can).

I cannot emphasise how valuable a nut tool is on new or adventure routes (even trade routes) for gardening cracks, both digging our direct and grass, as well as levering out flakes, stones and grit.  Many routes, both new and ones less travelled, can have bomber placements right where you need them, but have become grown over, and just need digging out.  Cracks can also become full of stones, or have a perfect possible placement by just levering out some flake or rock - which can turn a runout pitch into something far safer with just a minute of prising and digging out the placement.  Now I know there is a fine line between cleaning and damaging (even chipping) a route, and I look at this as ‘progressive cleaning’ where a solid nut or cam placement is created by the removal of shattered rock or soil.

How could a nut tool be dangerous you may ask (well for starters try getting on a plane with one in your pocket!).  Well if you think of it, a nut took is basically like a big sharp pointy knife-like thing, clipped to your waist - so yes it’s something that you should think about.

First off, you try and always clip the tool at the back quadrant of your harness, say the last piece on your second gear loop (not your rear gear loop, as discussed here).  The reason for this is that with the modern style of nut tool, where the karabiner is built-in if you have it on the front there is a slight chance that if you lift up your legs (common in a fall), the tool may go into your thigh (ouch!).  In the past nut tools were clipped onto the harness with a krab, so had a sort of hinge, but modern ones don’t, so it’s worth taking this into account.  Also always having your nut tool in one place makes sense for many reasons.

A modern steel nut tool with a good hook on it can offer the slimmest pro possible in some situations where nothing else can fit (a nut tool used to be the first runner on Comes the Dervish!), either hooked into a non-wire wire slot (a hole or RP style placement that is blind at the bottom, so a cable won’t fit) or a thin horizontal crack like a hand placed knife blade.  How strong are they like this?  Well not strong at all, and may - a repeat - may - just hold bodyweight if you slip into them (so only good a psychological runners above or beside you).  I think that one piece of protection that is missing on more extreme routes is something that hooks (on El Cap you use a lot of hand-placed bird beaks), and the hook of a nut tool is the nearest thing you have to it (the difference is a tiny beak can hold a big fall, a nut tool will only take up a tiny bit of strain as you jibber past it).  Be an interesting project to design a nut took that could double up as pro for situations where micro no longer fit?

If you find yourself on a rock route that has verglas on it, or a top out of steep grass, or even on an ice slope, then the only piece of gear that’s going to offer some form of security is your nut tool!

On icy rock, you can scrape the ice off footholds quite well with a nut tool, as well as in cracks when placing cams.  On grass and snow the security offered by a nut tool is pretty illusionary, but hey - it’s something!