I climb with a lot of novice climbers, and teach a lot of climbers how to lead and one of the most important skills in staying safe at the sharp end is getting your nuts to stay put.

It’s very common when you first start climbing to have your nuts tinkle out below you as you move up.  We even find it funny, sort of like a rite of passage, that classic “Oh I think you may need to put some more gear in” from your belayer, or worse still “don’t fall off - all your gear’s fallen out”, your nuts sliding down the rope one by one.

As you get better you tend to find this happens less and less, which is good, because as you progress the chances of a fall increase.  This gives most climbers the opportunity to learn nutcraft before they need it, while climbing at a grade where they should not be falling off.

Saying this I do see climbers teaching other climbers how to lead without really passing on the right skill, then sending them up a route that is way too hard for their skills set.  The danger here is that when someone who has never led before does their first lead - and I know this may sound crazy - they often don’t fully understand that of they fall off they won’t have a top rope!  The danger here is that the new leader is placing very poor gear but lacks the sense not fall!

The inability to secure nuts often appears with even more experienced climbers, who are blindly unaware that their nuts are poor, probably due to seconds not wanting to offend them.

The bottom line is nuts that get placed should be placed in such a way that they do not come out.

Why do nuts come out?

There are a number of reasons for nuts to come out, ignoring nuts that fail under load (here I’m talking just about non falling situations) but here are the two major ones.

Having the belayer stand too far away from the base of the route can cause wires to lift out and can be extremely dangerous.  This is caused generally by the belayer walking away from the base in order to see the climber, but also happens when say they want to sit or lay on a rock and watch.  In a fall the rope will attempt to snap tight to the highest loaded runner, and if the runners below are nuts they will be whipped upwards and out.  I resently saw someone on a route where their only good gear was a nut at their feet, but placing on placing an micro wire at the crux they decided to hang on it to see if it was any good (people do strange things when under pressure).  The belayer was about 20 feet away from the base, so as they weight came onto the top piece the wire below was plucked out.  Now the climber was left high about the ground hanging from one piece of pro he had zero confidence.  In most situations the belayer should attempt to always stay inline with the protection, and if this isn’t possible then they should add a directional at the bottom of the climb (staying inline also helps reduce drag). 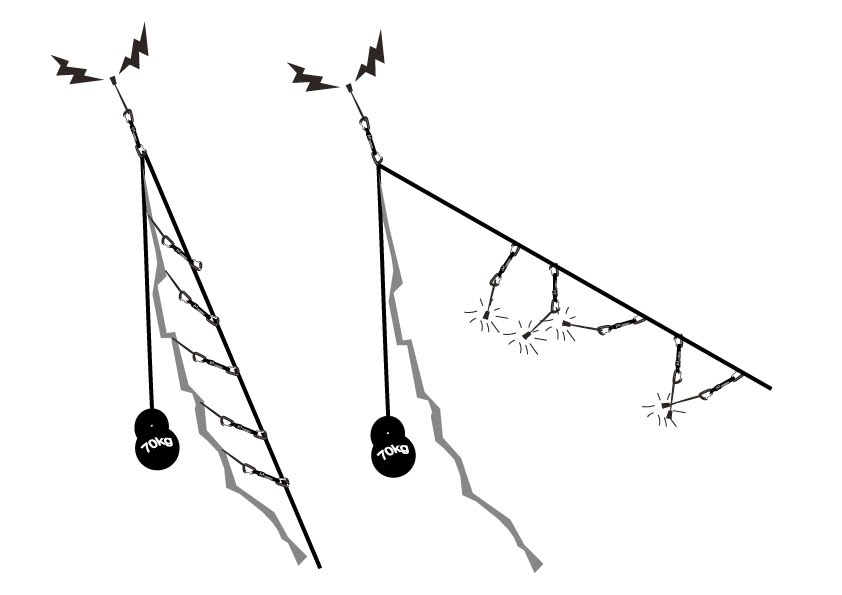 Failure to lock down the nut

For me this is the biggest problem for beginners, who place their gear as if it was made from glass, simply relying on the shape of the nut, the weight of the draw, and the pull of the rope to hold it in place.

How to get your nuts to stick

When I teach climbers to lead I often find that there is more concern about not wanting to make life hard for the second, rather than saving their own ass!  Learning to place solid gear goes hand in hand with learning how to get solid gear out, and so when you’re at the sharp end your number 1 concern is placing solid pro.  If you fall off and deck out, or take a longer fall and clip a ledge your partner is not going to thank you for all those crap and useless wires you left him!  And so to start with go with this mantra:

“My job is to make my wires as hard to get out as possible!”

This approach not only establishes a mindset that should lead to better wires, but also gives the second the opportunity to learn how to get solid wires out!

So now we have the right intension how do we place these solid wires?

First off learn how a wire works, how it contacts the rock, the different shapes, how a wire can be junk one way, but solid if you flip it the other.  Understand the difference between brass nuts and alloy, and how they work when nestled between granite, limestone or sandstone.  If you’re new to placing nuts then take a walk along the bottom of the crag and place and clean nuts.  Do what all small boys are told not to do = play with your nuts.

So now you understand how the nuts work we need to apply a little force to finish the job.  As I said before, in most cases nut and placement shape, along with rope action can cause a nut to be lifted out or shift position (more dangerous, as a nut may not be secure, but you think it is).

And so unless the nut is secured by the shape the placement, where the nut is ‘keyed’ in, I attempt to get the alloy body of the nut to ‘bed’ itself into the placement.  To do this you first find the correct nut, place it while still attached to your bunch or wires.  Once you’re sure it’s the correct one, yank it down using the bunch of wires attached to the krab (this gives you extra force due to the extension, handle and weight of the other nuts - something that would not work if you try it with a quick-draw).  Do this with five yanks of increasing force, so 1 - 2 - 3 - 4 - 5.  If the nuts rips out before you get to 5 then you can select a new wire, and if it doesn’t than you know that the wire is both solid, and should be locked in tight.  The force that can be applied although effective, should not be so large as to make a nut hard to clean by the second… but we’ll leave that for another instalment.