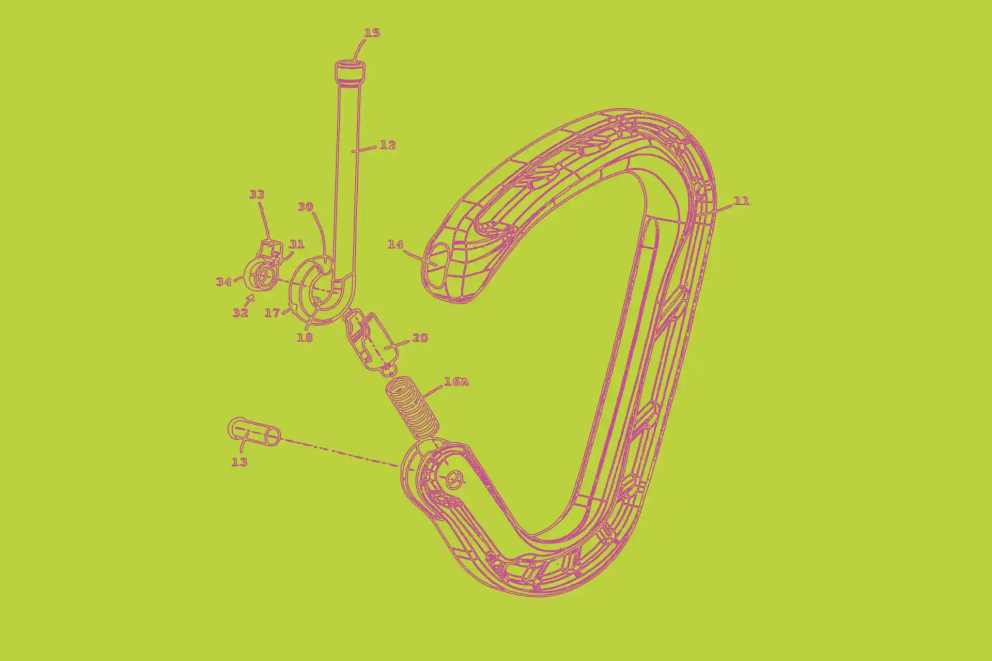 Also known as carabiners, krabs, snap-links, plain-gates or biners, these non-locking carabiners are the glue that sticks everything together on a climb, with most climbers carrying forty or more clipped to their harness while leading.  Non-locking carabiners are used in any application where weight, speed and handling are more important than total security (when 100% security is needed a locking screwgate would be used), being attached to quick-draws, cams and slings etc.  Some climbers also use non-load bearing carabiners for chalk bags, knives etc, but any carabiner carried by a climber should be full strength (you can get a full-strength carabiner that weighs 19 grams and can be easily handled so really beyond cost it’s not worth it).

Due to the large number of carabiners required, these tiny little alloy carabiners are designed to be lightweight, yet strong enough to take monster falls, both on their primary axis (along the spine), as well as giving you a fighting chance when loaded in weaker orientations (cross axis or over and edge).  Carabiners come in hundreds of shapes, with each manufacturer producing several dozen designs and flavours, from tiny carabiners that remove every gram of excess weight, to big chunky clippers meant for a climber who needs lots to grab, where an extra 20 grams is not a problem.

The main difference for most is between a solid gate or a plain gate carabiner, which I will cover below.

So the basics are snap-gates are non-locking links designed to connect your gear to your rope, but what snap-links are best?

The simple and blunt answer is it doesn’t really matter.  Old heavy-duty 12 mil clog carabiners, giant ostentatious purple DMM clippers from the 90’s, or high tech carabiners as small and light as a key ring; it really it doesn’t matter.  People climb hard things with a rack of snap-gates from the 80’s while others struggle on easy climbs with gear that looks as if it came from NASA.

All that matters, in the beginning, is that you have enough carabiners, which means one for each cam, twelve quick-draws, plus some left ofter for general stuff.  Only then is it worth tweaking your rack.

But what if I want the perfect set of carabiners

OK, so you’ve built a rack of casts off and bargain bin biners, but now you want to nail the perfect rack or start replacing what you have carabiner by carabiner.  Here are a few things to think about when looking for new carabiners.

People go on about weight a lot when it comes to gear selection, but carabiners are one area where it really can make a huge difference, where the difference between a 55-gram carabiner and one 50% lighter can weigh in at more than half a kilo on a normal rack.  This weight not only translates to less strain on arms and fingers but also to your legs when alpine climbing or routes with long walking’s - not to mention mean baggage allowances!  Maybe just as important is that lighter carabiners give one a sense of lightness when racking up to lead, that things are in your favour.  Having begun climbing with huge cast-off Clog carabiners that probably weighed in at about 100 grams each, the slow movement to lighter, smaller carabiners has been revolutionary for me.  These light carabiners have also allowed climbers to carry more gear for the same weight, and on a hard long route having extra gear can make a difference to your psyche.

Size: The size of a carabiner may seem very important when choosing a new carabiner and I can remember when carabiners like the BD Neutrino appeared on the market and people said they’d never catch on, due to their tiny size, about half that of a normal carabiner at the time.  Over ten years later the Neutrino looks quite chunky, and just like old school mobile phones,  people’s perceptions just caught up with technology.

The smaller the carabiner the lighter the carabiner and the less bulk on your cams, draws, harness and racks.  But how small is too small?  Well, people have calved a model of the Eiffel tower out the carbide tip of a pencil and can carry out microsurgery on the heart of a baby, so I’d say no carabiner is too small - that the human hand just adapts and learns to unclip and clip without even thinking about it.  Saying that there are some carabiners on the market, such as the Metolius FS Mini, which at only 23grams is crazy light, but are probably intended for use where desperate clips are not as common, such on big walls (where you need about 100 carabiners, so the weight saving more than justifies the size).

Size-wise it’s always worth sticking some large carabiners on your rack (say one or two quick-draws), as you may need to clip in multiple items (such as several strands of rope or clove hitches - something hard to do on tiny carabiners), and there can come a day when trying to clip some piece of gear just out of reach can only be possible with a carabiner a few millimetres bigger than your standard carabiners.

Gate: Plain gate of wire gate?  Well for me there is no question that for most climbers wire gates are best, being lighter and safer in most situations.  The weight comes down due to the wire, and the lack of a body to the gate means it does not suffer gate flutter like a solid gate (where the gate oscillates in a fall).  The gate flutter thing is no so important these days as all carabiners are much stronger when their gates are open than they were twenty years ago, but they are still much more resistant to freezing, getting gummed up and unclipping themselves (bent gates). So for me, there is no real choice.  There are a few very specialist carabiners that feature such things as gates that lock open then lock shut when clipped into gear (Cassin) or double gate carabiners that sit closer to a locker (Grivel and Rock Exotica), but all such carabiners are exotica, and few such designs stay on your rack day-to-day.

Wire gates are stronger because their stainless steel sprung-steel gate significantly exceeds the strength of an aluminium gate, the weak point in any carabiner. The stainless steel wire is actually the strongest part of the carabiner body - with the aluminium body failing before the gate breaks, closed, open or minor axis, and in every test, the wire gives a higher test result than a conventional gated carabiner. A lot of the carabiners that are old school solid models that have been modified to wire gates (Wild Country Wild Wire, BD Quickwire) are stronger than their solid traditional gated cousins, although have the same rated strengths because it’s too expensive to change the bodies of the carabiners. The key strength difference in Wire gates is in their ability to reduce the ‘whiplash’ effect on the gate in a fall. Any modern carabiner with its gate closed is virtually unbreakable unless it is loaded over an edge or is damaged in some way. Generally, the only reason carabiners break is a combination of a high impact force while the gate is open. All new carabiners must have a gate open strength in excess of 7KN, which in most circumstances is strong enough to hold a fall, especially when climbing a low impact half ropes and a good distance from the belay. But they still do break. This is caused by the spine of the carabiner striking the rock in a fall, causing the gate to open, the higher the mass the longer it stays open. The low mass of the wire gate makes it much less susceptible to this phenomena.

These days is a carabiner comes to market you can be sure it’s stronger than you’ll ever need it to be (the highest real-world load a carabiner could take 12kN, but in reality, it’s more like 6kN in 95% of climbing falls).  When choosing carabiners I would still pay attention to strength and mix in a few super-strong designs for high stress or unusual loading situations (such as when you cannot avoid having the carabiner loaded badly, or have multiple loads applied to it at once).

Having a ‘hero-draw’ that has two super strong, chunky carabiners on it (such as the DMM Shield can work sometimes to calm the nerves, as you’re clipping your pro with the strongest craps you have.  Alternatively have a lightweight screw-gate instead of a plain-gate at the clipping end of one draw, as this has the double up of also allowing you 100% security when you have only one piece between you and the ground.

If we look at gate and size as the combined design of the carabiner then I would advise that you don’t go all out for one model of carabiner, but instead mix it up.  In all your gear you should aim for a pragmatic approach to your gear, and having a variety of sizes and shapes (include one of two solid gates for example) is always a good idea, even if it means your rack doesn’t match.

An example of this is the aforementioned DMM Shield, a super solid wire gate that always made me feel a little braver when clipping my gear with it, its thick body looking as if it could stop a jumbo jet.  I liked these carabiners so much I almost replaced all my draws with them, but then one day, climbing on a sea cliff I got to an old peg, its eye hammered in a little too far into the rock.  Feeling a bit scared I pulled out my trusty hero-draw, with the DMM Shield attached and went to clip it.  No matter how I tried it would not fit in, the angle of the nose and its thick shrouded gate unable to pass through the eye.  Out came a Petzl Spirit and with its super narrow nose and slightly different shape the peg was easily clipped.

Yes colour does matter when it comes to carabiners, and it’s well worth making sure all rope clipping carabiners are one colour, while gear clipping carabiners (the end that goes into wires or bolts) is another.  This helps to both identify the fixed end of quick-draws, as well as keep the rope contact surface of your carabiner free of dints and burs, which can cause damage.  Although it sounds gimmicky, having carabiners that match your cams is also nice, especially if you end up with racks that are overstuffed.