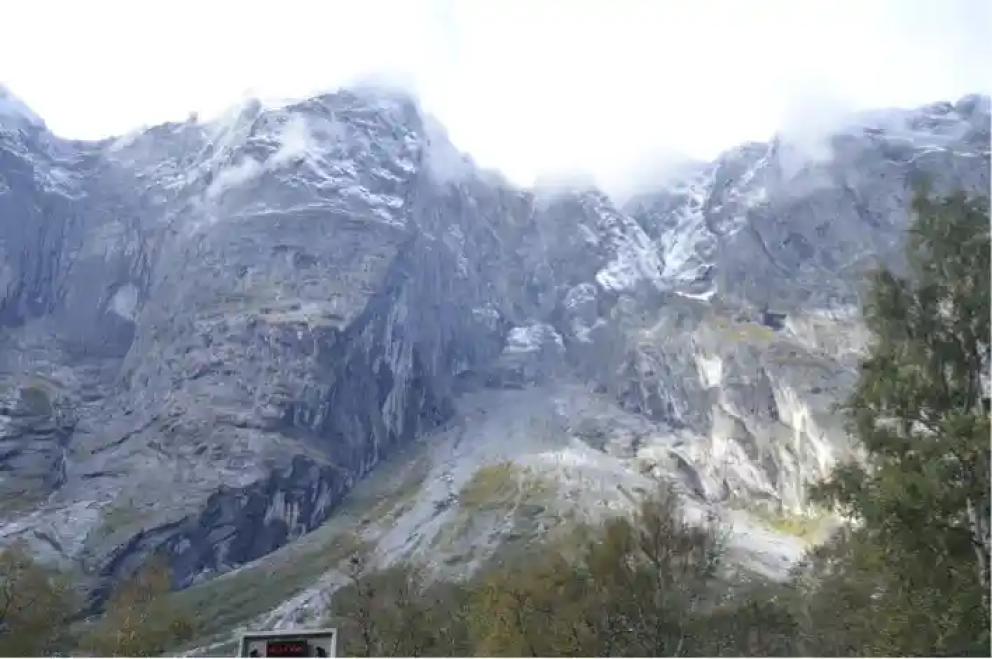 It stopped raining today and finally made it up to the wall with the rest of my gear, plus even had enough energy left to do the first pitch. Not to bad really as I was considering knocking it on the head.

Parked at Fiva farm and the farm manager (and old guy with a missing finger) told me that he remembered the Brits climbing the wall for the 1st time in the 60’s. He also recommend that I didn’t go to the wall, but I promised if it was dangerous I’d come back down (the bit I’m on is pretty solid). Funny thing was as I was driving towards the wall - feeling a bit gripped - I realised the Norwegian radio was playing Chris Rear’s ‘Road to Hell’.

Think I’ll make this my last trip where I carry a 50kg haul bag up a never ending scree slope. Worse thing is if I rap the route (good chance as there is snow and ice at the top now) I’ll have to carry my bags out in relays. Guess best not to think about it.

First pitch (v) was a horrible slimy waterfall, and I ended up aiding half of it. Climbing above looks very steep and less wet.

I’m doing the route capsule style (fixing some ropes from 3 camps) as this is much safer on such a nasty wall, and it allows me to zip back to my bivy without getting caught out in a storm with no bivy set up.

Sleeping under a slight overhang on the ground tonight, and have set up a tarp to keep the drips off, so pretty comfy. Tea was tomato soup with left over bread dunked in. I’ve got 10 days food with me, but I really hope it doesn’t take that long!!!!